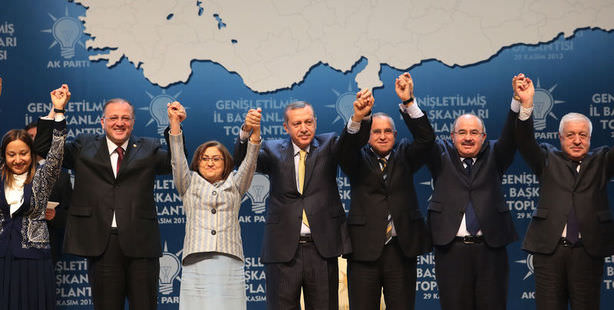 Prime Minister Erdoğan warned fellow party members to be aware of attempts to sow discord by the opposition in the lead up to the local elections in March during his ruling Justice and Development Party’s (AKP) provincial chairs meeting. During Friday’s meeting, Erdoğan also announced 21 new city mayoral candidates for his party, six of which are for metropolitan municipalities.

Prime Minister Recep Tayyip Erdoğan warned his fellow ruling Justice and Development (AK) Party members of attempts by the opposition to sow discord in the upcoming months leading up to local elections at a provincial chairs meeting held on Friday. "We have an opposition that fails to produce anything. We have projects, visions, goals, dreams, energy and excitement. They however, have no projects, excitement or vision. Yet they also have no need to incite, cause sedition or sow discord. If you pay close attention, you will see that up until now they have garnered votes in every election without exerting any efforts, presenting any projects or putting forth even a single production," stated Erdoğan warning his fellow party members to "be extremely careful of any attempts to incite, cause sedition or sow discord."

HUMILIATED IN THE PROCESS: Prime Minister Erdoğan also recalled an incident in which the deputy chair of the main opposition Republican People's Party (CHP) claimed to have a document alleging that Syrian refugees have been registered as voters in Turkey. This document in question explained Erdoğan, is the identification card of a Turkish citizen of Syrian heritage who has lived in Turkey for 18 years now and received citizenship rights in 2008. "This is their style of conducting politics. Someone gives them a couple pieces of paper that they then use as their basis only to become humiliated in the process," stated Erdoğan adding, "They however, continue on their path, unashamedly and as if nothing has happened."

Prime Minister Erdoğan went on to explain that it is as if the opposition is pleased by insults and pointed out that they have acted distastefully and have uttered unmentionable statements directed at police, women, their own deputies and even ministers. "Without any decorum or acknowledgement of family or individual privacy or private lives, they unabashedly attack. When we respond, react or criticize such acts they are so impudent that believe me, it makes them happy," said Erdoğan.

"During the next four months, the opposition will not present plans, projects or their vision all they will do is attempt to sow discord," said Erdoğan warning that the opposition will use every opportunity they have from both within and outside the country to sow discord and adding, "They will even collaborate with Turkey's enemies to attack us."

Prime Minister Erdoğan asserted that while others pursue pillaging and fleetingness, they will be working for the betterment of Turkey because they were not put in power by the nation for any spoils, as pillaging is not what they do. "Those who pursue the prize have lost out from the start. Those who remain seated where they are with the belief that they have already won have actually already lost the election, even if they are elected," stated Erdoğan.

OUR CHILDREN WILL NOT BE MADE A TRADE COMMODITY: Prime Minister Erdoğan also addressed the ongoing debate surrounding the potential closure of high school and university exam preparatory schools known as 'dershanes' by stating, "Let us spend our Saturdays and our Sundays with our children. Let us not turn our children into race horses on Saturday and Sunday too. They also have a right to have a break and rest. They also have the right to roll around on the grass and to play in the dirt. Let us not deny our children this right." Erdoğan vowed to continue to exert efforts to ensure that the nation's children will be brought up to be able to achieve advanced opportunities through the national education system and state educational institutions. "However, we will not allow for our children to be literally perceived as an economic resource. We will not allow the opportunity for them to become a trade commodity," asserted the Prime Minister.

After recently announcing a first wave of ten AK Party candidates for the upcoming local elections, on Friday Prime Minister Erdoğan revealed an additional 21 candidates to run for city mayoral positions, six of which will run for metropolitan municipalities. Family and Social Policies Minister Fatma Şahin, who will run for Metropolitan Mayor of Gaziantep, is also the first name to be revealed for the running of the local elections from Erdoğan's own cabinet. Prime Minister Erdoğan also shared plans to announce the AK Party's remaining candidates on Tuesday and Thursday of next week.

The 21 candidates announced on Friday are as follows: