Dinçer says the gov't took on the burden 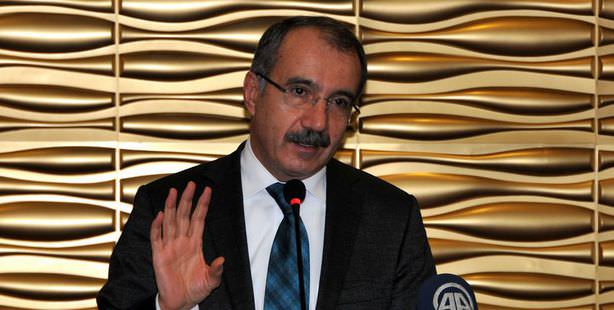 Former Prime Ministry Undersecretary Ömer Dinçer responds to allegations of the government being asked to monitor fundamentalist activities by stating, “While we stood up like a mountain against coup plans against us, they continued their activities in security and in peace.”

As the ongoing debate ensues regarding the state's intentions to shut down 'dershane' high school and university entrance exam preparatory schools, allegations have surfaced alleging the AK Party had intentions to further the strategy against reactionary forces established on February 28, 1997 at an infamous National Security Council meeting, which resulted in a military memorandum which led the way to the 'post modern coup'. Reports have surfaced claiming that during an August 2004 National Security Council (MGK) meeting, an action plan was recommended to and signed by the government which would blacklist all private prep schools, dormitories and institutions operated by followers of Islamic scholar Fethullah Gülen.

SABAH had the opportunity to discuss the allegations, with the very individual who was in charge of the Prime Ministry Monitoring and Coordination Board (BUTKK) at that time, which is slated to have continued the strategy against fundamentalism established on February 28, former Prime Ministry Undersecretary and AK Party Istanbul Deputy Ömer Dinçer.

* The decision regarding preventing reactionary forces reached at the August 2004 MGK, is being portrayed as if it is an extension of the procedures set in place by the 1997 BUTKK…

On April 28, 2000, during the reign of the Bülent Ecevit Government, the National Security Council (MGK) accepted a strategy for preventing political Islam (reactionary) activities. The BUTKK was assigned to deal with this strategy. However, the BUTKK's correspondence and the recommendation put forth during the August 25, 2004 MGK are entirely separate issues. Why? Because, the MGK recommendation in 2004 was not made into legislation by the Council of Ministers and the file was shelved. BUTKK did not conduct any procedure regarding the recommendation. It is morally incorrect to portray the BUTKK's procedures as being the continuation of the decisions reached during the 2004 MGK.

* Isn't BUTKK an extension of another MGK decision?

BUTKK is a board that was established subsequently to the MGK decision made during the February 28 process. The strategy established to prevent reactionary forces on April 28, 2000 is within BUTKK's line of duties. The chair of BUTKK is the Prime Ministry Undersecretary. The Undersecretary at the time sent correspondence on the strategy document to all institutions requesting monthly reports. I made no other form of correspondence regarding this strategy during my term as undersecretary. The board would receive routine monthly reports. This was a time in which the February 28 process of restricting people's rights, liberties, beliefs and freedom to practice those beliefs existed and the religious segment especially as well as all of their companies, foundations and schools were under scrutiny. This was an issue of trying to overcome with this sort of plan.

Once I saw the strategy established against fundamentalism, I had BUTKK conduct a study. On October 28, 2004, we had the board accept an "Additional Action Plan'. However, in the beginning we did not alter the name of the strategy. Because, at that time we did not yet have sufficient power to completely eradicate the strategy. The Additional Action Plan was an effort to lift the pressure exerted on the pious people in Turkey and aimed to create a new perspective. However, due to the fact that the former strategy name had not been changed, all correspondence still took place within the framework of preventing fundamentalist activities. However, the content was not the same. The strategy against fundamentalist activities had a misplaced objective and with this additional plan, we established a new area of action for ourselves. My correspondence and the documents reflected by the press are in relation to this additional plan and were steps taken to overcome the previous strategy against fundamentalism.

* What did the BUTKK's correspondence contain?

Representatives from the General Staff would come to BUTKK throwing photographs of female students wearing headscarves in front of us and would ask us, 'Why aren't you taking measures? I was obliged to send correspondence regarding the issue to the National Education Ministry to request an inspection. These were bureaucratic formalities. We did send correspondence regarding the complaints we received at that time, however nothing was ever done against any complaint or any individual.

* Isn't it ironic that this correspondence is being used against you now?

Those directing accusations at me based on this correspondence are using what I wrote at that time as material for accusations in an attempt to close those files against them. Certain people are trying to gain an advantage from the material they have against the government or whoever is against them without taking right and wrong, or fair and unjust into account. It is possible for us to resist against this when it comes from people who do not bear sensitivities to Islamic issues, however there is truly no response to allegations made by those who claim that they do harbor sensitivities to Islamic issues.

* What orders would the Prime Minister give you in regards to these former strategy documents and demands that were made accordingly?

From 2004 up until the middle of 2005, information would regularly come in regarding plans to stage a coup against us. Our Prime Minister's order to me was, 'In light of these types of preparations, we must absolutely never veer from doing what we know to be right. We will patiently cover our ears to the accusations made against us and will continue to do what we know is right!' And that is what we did. We resisted everything with patience.

* What sort of demands did the military have in regards to the 'community' (the Gülen Movement)?

For example, the military proposed to BUTKK that the Newspaper Writers Foundation be shut down. Because I did not follow through with the request, they accused me of being a 'community' member. We dealt with these sorts of issues in a way in which no one would get a headache, I took on all of the pressure.

* How was the National Security Political Document changed?

The National Security Political Document contained an 11-page strategy against fundamentalism. We attempted to change this document in 2005. The document even contained preventative measures against individuals practicing their religious rights and liberties to practice their faith in the public sphere. In 2010, the National Security Political Document was altered entirely. It was changed to solely deal with external threats. Fundamentalism was taken out and as a result, the BUTKK no longer had any function nor need to track the strategy. If people are denying these realities in this country, then there is nothing left to say. Those who did not raise their voices while all of this was happening, and those who were not highly vocal in appealing this situation have no right to say anything.

If Fethullah says he is 'speechless'… While we stood up like a mountain against the Ergenekon, Balyoz, Ayışığı, Sarıkız and Yakamoz Coup plans against us, they continued their activities in security and in peace. While we were subjected to unjust accusations by the central media, we never let them feel a thing. If they use a completely contrary reporting logic and attempt to use methods in place by the central media spanning back to February 28 to deal with this issue despite all of the pressure we endured and took on to protect them, then Gülen should come and see for himself who is truly 'speechless'.

* It is said that the AK Party had put an annotation on the December 2002 Supreme Military Council dismissal rulings. A similar stance could have been adopted for the August 2004 MGK decisions…

Who was the chairman of the MGK at that time? President Ahmet Necdet Sezer. The February 28th pressure still existed in the MGK at that time. The government pursued an intelligent strategy and chose to not make these sorts of ruling attempts to be an issue of debate. They listened to what was being said and attempted to gain time and to turn the situation into an opportunity to nullify the issue. What did they do? When the MGK decisions were brought to their area of authority, they did not follow through with procedures. The Council of Ministers did not turn it into legislation. The MGK is not an area where the government makes the sole decisions. By paying heed to the fact that a decision was not ruled on in the records of that meeting, they chose to distance themselves from tension.