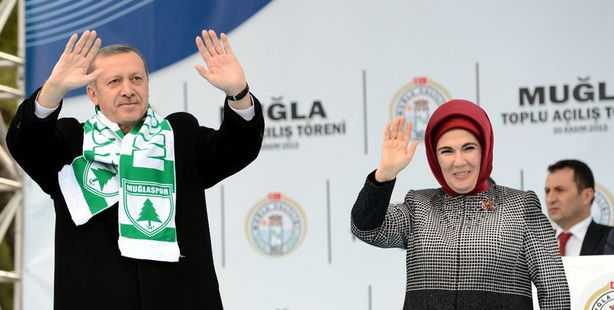 “We are reviving Atatürk’s first parliament opened on April 23, 1920,” announced Erdoğan during a two-day trip to the Southwestern province of Muğla, adding, “There cannot be a great state that denies. We will live on this land together as brothers, which is precisely why we brought Barzani to Diyarbakır.”

Addressing crowds on the second day of a trip to Muğla, Prime Minister Recep Tayyip Erdoğan stated that the new Turkey is actually the same Turkey in which Atatürk and his comrades opened the first parliament on April 23, 1920. "We are bringing Turkey back to its essence," said Erdoğan.

On a two-day visit to the southwestern province of Muğla, Prime Minister Erdoğan addressed crowds in both Fethiye and Milas by stating, "Our politics are not ideology based, it is a policy based on service. We have always said from the start, that we have not come to power to become masters; we are here to be servants. Our politics are not at all based on fear, intimidation or exploitation."

Underlining that they have never considered voter rates as a basis for providing services in provinces, Erdoğan explained, "Just because we do not have a deputy in Hakkâri does not mean that we do not provide services there. We have never done that. We have given the region whatever it needs, from education, health and transportation and in fact are about to finish an airport there." Prime Minister Erdoğan vowed to continue to revive the East and the Southeast in the same manner as they do the West, "Because," he added, if we do not revive the 780,000 kilometer-square land of our homeland, then we are providing material for certain separatist circles." Erdoğan pointed out that the investments made in the East, Southeast, East Black Sea and Central Anatolian provinces during their term in power is at a level never-before-seen and pledged that they will continue.

'WE PROVIDE SERVICES TO WHEREVER THERE ARE PEOPLE'

Explaining that a great state can never evolve through fears of citizens' style of dress, ethnicity or language, Erdoğan stated, "I love Kurds just as much as I love Turks, Georgians, Laz, Albanians and Bosnians. A state that denies or rejects this and assimilates cannot be a great state. When we set out we said, 'we will not promote ethnic or regional nationalism, we will live on this land as brothers.' This is why we have pursued the resolution process and it is why we brought Barzani to Diyarbakır."

Underlining that Şivan Perwer was forced to leave Turkey because he sang songs in Kurdish, Erdoğan pointed out that popular performer İbrahim Tatlıses also attended the historical meeting that took place in Diyarbakır in mid-November. "Why were we there? We were there for the unity and fraternity of this nation, we were there to realize this embracement all together," stated Erdoğan who appealed to the crowds, "Please do not grant those intending to divide us any opportunities. We are only in favor of the citizenship of the Turkish Republic, which suffices for us."

THE TURKEY OF ITS FIRST PARLIAMENT

"As the leader of a secular state we uphold an equal distance to all forms of beliefs," stated Erdogan, adding that he was despised for having a daughter who wears a headscarf. "Our daughters were forced to study in other countries. However now, they are all able to attend universities and to work in public positions. Does this cause any problems," asked Erdogan. "The new Turkey we dream of will be this kind of Turkey. We are reviving the legacy of Atatürk's first parliament opened on April 23, 1920. We are bringing Turkey back to its essence," stated Erdoğan.

Prime Minister Erdoğan has filed a criminal complaint against columnist Emre Uslu who penned an article entitled "Close Them All" which was published by Taraf newspaper on November 21st. The article in question was regards to the ongoing debate of the state's intentions to shut down all 'dershane' high school and university exam preparatory schools, and contained terms such as 'jackal, immoral, liar and traitor' in reference to the prime minister.

Erdoğan's attorneys are seeking compensation worth 50,000 Turkish liras on the basis that the article was on attack on the prime minister's personal rights. The case petition states, "the defendant could have written an effective article without using such harsh expressions and still fulfill his goal of serving the press. However, this was not the defendant's intention. Instead, his objective was to insult our client in the harshest way." The petition argues that Taraf Newspaper and the column penned by Uslu not only caused damage to Erdoğan, but also harmed the press as well as society and constituted a clear attack on the personal rights and moral character of the prime minister.

In addition to the compensation sought by Prime Minister Erdoğan, the Ankara Chief Public Prosecutor's Office has also filed a public criminal complaint against Uslu on charges of "insult."