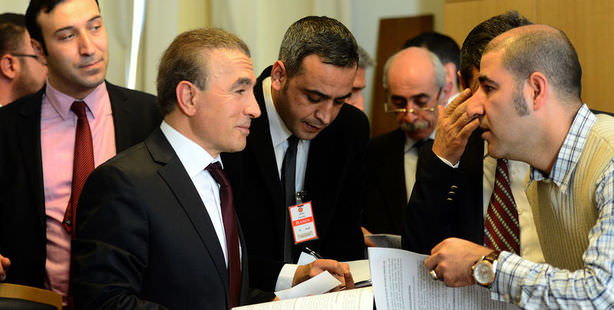 A 450-page report on the ongoing resolution process was released on Monday by Parliamentary Resolution Process Assessment Commission Chairman Bostancı who told reporters, “This nation no longer wants bloodshed. People do not want to dig out graves for their youth. It is not easy to surmount the sea of blood established from 30 years of pain, however we will overcome this.”

Referring to Prime Minister Recep Tayyip Erdoğan as playing an inimitable role in the ongoing resolution process, Bostancı recalled a statement made by the premier during a tree planting ceremony at a university in Muş in which he stated, "Thank goodness I am digging up soil to plant a tree and not for a funeral."

During a press conference with fellow commission members, Ruling Justice and Development (AK) Party Amasya Deputy Naci Bostancı stated, "We have heard out the public that are victims of a 30-year era of bloodshed. Mothers would open their doors fostering hope for their child's future only to instead receive news of their death. This resolution process is to ensure that children now return to their homes and not be killed by fire. Society's volition and even more so the volition of those who have suffered are what stand behind this process."

THE PRIME MINISTER HAS PLAYED A GREAT ROLE

"Turkey has changed. There has been a transition from the state's public to the public's state. The state used to define the nation, however now the nation defines the state, which is how it should be. The inimitable role the Prime Minister has played in this transition as well as the societal volition that has formed the AK Party far surpasses any form of appraisal," stated Bostancı.

PEACE IS MORE BENEFICIAL THAN BLOOD

This nation no longer wants bloodshed said Bostancı adding, "No matter what an individual's political views are, people no longer want to dig up graves for young bodies." Peace is always more beneficial than any form of bloodshed or conflict, said Bostancı, telling reporters, "Of course we cannot agree on everything, however when it comes to this issue we are all in agreement that the resolution process is absolutely necessary and one that needs to continue despite attempts at overshadowing, instigating and challenging the process." This is a step-by-step process that must progress. The pain suffered throughout this 30 year period has created a sea of blood that has risen like a wall to divide the public," said Bostancı. It is not easy to surmount the sea of blood established from 30 years of pain, however hopefully, we will be able to overcome it. All of the efforts we have made thus far shows us that this sea of blood is surmountable," Bostancı told reporters on Monday.

THERE WAS AN ASSIMILATION APPROACH

When asked by reporters whether they had uncovered any evidence of attempts at assimilation in their research into 90-years worth of archives, Bostancı stated, "Turkey was founded as a nation state. There was an approach of assimilation of the Kurds and of exerting pressure and ostracizing them. The Dersim incident is clear." In response to the surfacing of speculation regarding a general amnesty, Bostanci stated, "It is not appropriate in politics to issue statements before their time."

DO NOT FLIP OVER THE PEACE TABLE

1- DO NOT FLIP OVER THE PEACE TABLE: The first step for establishing peace is negotiations, do not flip over the table of peace. The difference between attempting to solve the issue through rejecting or denying the Kurdish identity, assimilation, exerting armed pressure and police measures and that of a democratic perspective based on dialogue and discussions should be well conceived.

2- PROTECT SOCIETAL SUPPORT: Society's support for the government in this process should be protected.

3- A DEMOCRACY-BASED AND NOT SECURITY-BASED PATH: A democratic approach must be furthered instead of security-based policies.

4- ALL INSTITUTIONS NEED TO BE INCLUDED: All of the state's institutions need to be involved in the process. Everyone needs to exert all of the support they can in order for this process to evolve and the advantages gained to be referred to as 'positive peace.'

5- THE COMMON VOLITION MUST BE PROTECTED: In order for the continuation of the process, this joint volition needs to be protected. The areas of priority within the process must be established. All areas that can be jointly overcome need to take the forefront.

6- THE DISARMAMENT PROCESS: The disarmament process needs to be correctly directed. The eradication of the terrorist organization's weapons is the one factor that could be a breaking point in the process and is also where debate becomes knotted. We must not imprison this solution to a very short lifespan.

7- THE IRA AND ETA EXAMPLES SHOULD BE READ CORRECTLY: As was the case with IRA and ETA, all sides need to be negotiated with. All sides need to have stakes in the process and in this manner, patiently support the positive climate as well as in terms of socializing the solution.

9- PUT AN END TO SEPARATION PARANOIA: In this resolution process, we need to break free from paranoia and questions such as 'they are deceiving you, what did they give you, what are you taking, what did you give and we are being divided.'

10- CONDITIONS NEED TO BE SET FOR ITS CONTINUATION: Conditions need to be established for the continuation of the process. To not establish conditions from the start will only serve a deadlock and will not derive any benefit.

11- THE LANGUAGE OF PEACE NEEDS TO BE ESTABLISHED IN EDUCATION: Our education system needs to transition into one focused on democracy, human rights, peace, tolerance and empathy instead of one in which there is a race of spite, hate, marginalization and pain.

12- THE OPPOSITION MUST ALSO BE INCLUDED: Opposition parties need to reassess their stance. CHP and MHP should not distance themselves from the process. For them to not provide members to the commission is a factor that is lacking.

13- CARE MUST BE PAID TO SENSITIVITIES: The sensitivities of the Turkish-Kurdish public should not be forgotten. We need to consider this issue with empathy and uphold the mindset that if a solution is not reached, the first child to be killed could be your own.

14- ALL SIDES ON POLITICAL GROUNDS: Steps need to be taken to promote all sides taking a political ground. An environment of dialogue cannot fruition in environments where armed actions and violence continue. Therefore, it is an absolute necessity that the armed environment be silenced. By paying heed to the fact that disarmament will take an extended period of time, hurried actions must be avoided.

15-A CONTINUATION OF DEMOCRATIC STEPS: In order for the continuation of the process, democratic steps must continue. The definition of terrorism criminals must be minimized and disarmament through democratic steps should not be placed in the same category. The guardian system should be eliminated parallel to the decrease in security issues and local administrations should be fortified.