Collaboration with Qatar for Geneva 2 conference on Syria 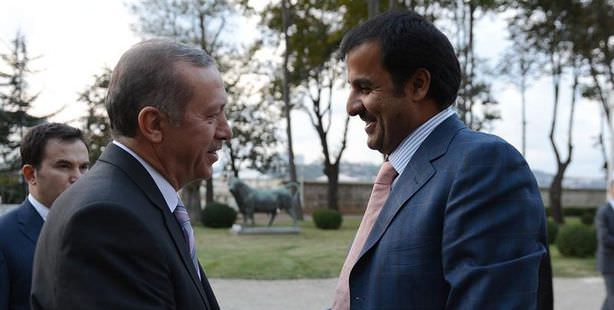 Syria and the upcoming 'Geneva 2' conference were the main focus of Prime Minister Recep Tayyip Erdoğan's day trip to Doha. During his staying in the Qatari capital, Erdoğan had the opportunity to hold talks with Emir Sheikh Tamim bin Hamad Al Thani, during which they reached a consensus to act jointly to ensure the Syrian opposition convenes under one umbrella at the January 22 Geneva 2 conference in order for the opposition to have the opportunity to strongly convey their demands.

During the Prime Minister's visit, Qatar Emir al-Thani expressed that the strong cooperation established between Turkey and Qatar during his father, Sheikh Hamad bin Khalifa Al Thani's era as emir will continue throughout his own period of reign and emphasized the high importance they place on having shared policies with Turkey on regional issues. Underlining that the two nations especially uphold the same views when it comes to the situations in Syria and Egypt, Emir al-Thani emphasized their determination to further advance their close cooperation with Turkey. Prime Minister Erdoğan especially focused on the steps to be taken in light of both the Syria and Egypt issue and expressed the strong necessity for the Syrian opposition to have a strong presence at the Geneva 2 conference next month. Turkey and Qatar will work together to ensure the Syrian opposition convenes prior to the January 22 Geneva peace talks on Syria and attends the conference as a sole structure representing the Syrian opposition as a whole. Throughout the conference, the two nations will conduct diplomatic efforts to ensure the opposition's demands are met.

During an opening ceremony for the new Turkish embassy building in Qatar, Prime Minister Erdoğan noted that Turkey and Qatar have overlapping views when it comes to both regional and international issues and said, "We have been doing all that we can with Qatar to ensure our region becomes a basin of peace."

The total projects embarked on by just 35 of the Turkish firms in Qatar have reached 12 billion dollars, said Erdoğan, who also announced plans to open a Yunus Emre Cultural Center in Doha as soon as possible. "You can consider this center as your second home, because it will be founded as a beacon of peace," said the prime minister.

Erdoğan also praised the architecture of the new Turkish embassy building in Doha, which is reminiscent of the former parliament building in Ankara by stating, "We are extremely pleased that the building was built architecturally as we had hoped for." During his short stay in Qatar, Erdoğan also met with former Qatari Emir Sheikh Hamad bin Khalifa Al Thani before departing to return to Istanbul in the evening.