A new era for Turkey brought to the parliament 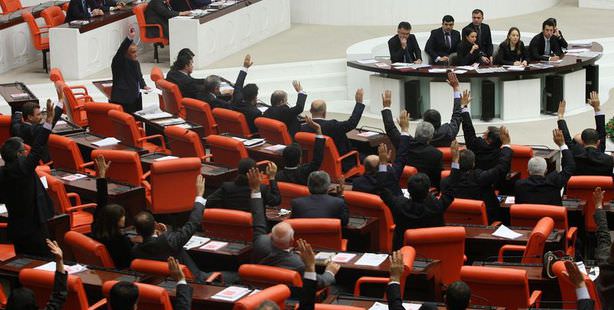 A 17-article package as part of the highly anticipated ‘democratization package’ was presented to Turkey’s Grand National Assembly for approval on Thursday. With the passing of this legislation, which includes amendments spanning from education in native languages to propaganda and political parties, from hate crimes to demonstrations and headscarves and meddling in lifestyles, Turkey will embark on a whole new era.

The government submitted a 17-article draft legislation as part of the highly anticipated democratization package to parliament on Thursday. This new legislation contains a series of impertinent amendments for crucial basic rights and liberties reforms spanning from political parties conducting propaganda in their native language to opening different language and dialect schools and increased sentences for hate crimes and meddling in lifestyles.

The legislation regarding the election threshold, which was presented as three different options, was left out of the package as a result of the failure of any party in the parliament presenting proposals. The following are a series of finer details of the government's draft legislation entitled 'A Draft Law for Amendments on Various Legislation Aimed to Increase Basic Rights and Liberties' presented to the parliament on Thursday:

KURDISH PROPAGANDA: The law and sanctions against the use of any other language than Turkish in conducting election propaganda will be lifted. In addition to Turkish, other language and dialects will be allowed to be used by political parties and candidates while campaigning.

CO-CHAIR SYSTEM: Political parties will be allowed to implement a co-leadership system aimed at establishing a more vocal and participant structure. The number of co-chairs will be limited to two people.

THREE PERCENT THRESHOLD FOR TREASURY AID: The threshold for political parties to receive treasury aid, which was previously set at seven percent of the vote, will be brought down to three percent. The treasury funds allotted to such parties will be no less than one million Turkish liras.

HEADSCARVES IN SCHOOLS: All obstacles to wearing headscarves for students and teachers will be lifted. Penal sanctions will be applied to anyone who uses force, threat or any other illegal actions to prevent an individual's right to receiving or providing education as well as in preventing the entry of any individual in buildings where students cohabit or their extensions. Any person who commits any such act will be sentenced to anywhere between two to five years in prison.

PENAL SANCTIONS FOR HATE CRIMES: A person who obstructs the selling, transferring or renting of any individual's movable or immoveable property or whom prevents someone from benefitting from public services, or obtaining employment or conducting any economic activities based on hatred stemming from a difference in language, race, nationality, color, gender, disability, political views, philosophical beliefs or religion will be charged with a one to three year prison sentence.

LOCATIONS DESIGNATED FOR DEMONSTRATIONS: The views of political parties, labor organizations and unions will be sought in establishing the place and route for demonstrations and marches. The location where demonstrations staged according to the right to gather will be determined by the civilian authority. The determined location will be announced to the public via local newspapers, governorships and district governorate internet websites. In the case of a legal demonstration or march turning into an illegal situation, the Regulatory Board will announce to the public that the event has ended and will inform the local police chief.

LIMITATIONS TO RECORDING: Demonstrations and marches in open spaces will be dispersed before sundown and by midnight in indoor locations. Security forces will be allowed to record sound and imagery of participants and speakers at demonstrations and marches. However, these recordings will not be allowed to be used in any other manner besides identifying suspects and criminal evidence.

LOCATION NAMES: The article, which up until now allowed for villages that did not have Turkish names to be given Turkish names, will be lifted.

PRISON SENTENCE FOR MEDDLING IN LIFESTYLES: Preventing someone from fulfilling their religious beliefs, or conducting religious ceremonies as either an individual or in groups through the use of force or threat or any other illegal means will now be considered a crime. Any person who commits such a crime will be sentenced to one to three years imprisonment. The same sentences will be applied to any individual that uses force, threat or any other means to either intervene in another's lifestyle or to forcibly attempt to change an individual's beliefs, thoughts or views.