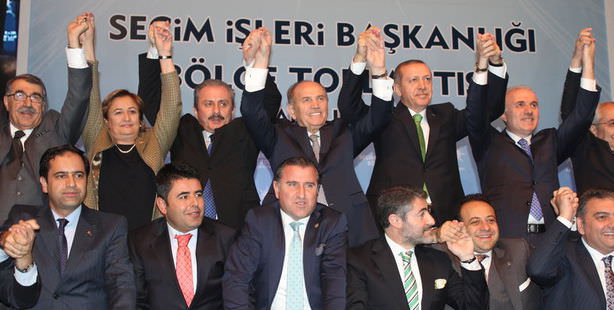 Prime Minister Erdoğan announced an additional 21 candidates that will run for the ruling Justice and Development (AK) Party in the March 2014 local elections, including incumbent Istanbul Mayor Kadir Topbaş, who will be seeking reelection for a third term.

Addressing his fellow ruling Justice and Development (AK) Party members at the Haliç Congress Center on Thursday, Prime Minister Recep Tayyip Erdoğan announced a new wave of 21 candidates for the upcoming March 30, 2014 local elections. With yesterday's revealing of 21 additional candidates to run for mayoral positions, including seven metropolitan districts, the AK Party has announced a total 68 candidates that will run for the ruling party in the local elections. Erdoğan also announced the AK Party's highly anticipated candidate for Istanbul Metropolitan Mayor as incumbent Istanbul Mayor Kadir Topbaş, who will be running for a third term.

"We have announced 47 candidates up until now, and now we are announcing an additional 21. This means that our candidates for 68 provinces have been revealed. That just leaves 13 provinces left," said Erdoğan.

"We are going into the March 30th local elections with two significant advantages. The first advantage is our experience and the second is the fact that we have substantial plans and projects that define us even better than we could have ourselves. Nobody can compete with the AK Party's understanding of municipal work," stated Erdoğan.

The Prime Minister pointed out that for the AK Party, being a municipal mayor is not just a position, it is serving the nation, and stated, "Just how our government's sensibilities are to not fill our own pockets or those that we are close to but to fill the nation's treasury, as is our understanding of municipalism." Erdoğan added, "our understanding is to build livable cities."

Erdoğan went on to acknowledge that had their government been interested in filling their own pockets the vast progress made in schools, classes, providing free text books and the Fatih Project would never have been realized. "These are all signs of how much we have strengthened our nation's treasury," stated Erdoğan.

"If the treasury was empty could we have built these large hospitals we now have in all 81 of our provinces? When we came to power there were only 6,100 double lane roads in Turkey, to which we have added 17,000 kilometers. If we were a party that filled our own pockets, could we have done any of this," asked Erdoğan.

The March 30th elections will be a milestone for Turkey, stated Erdoğan adding that with the ongoing urban renewal plans for Istanbul, together they will be rebuilding Turkey's civilization and will continue to ensure Istanbul is the 'mother' of all cities. 'We have even more to give than what we have done so far", said Erdoğan, also pointing out that it was during his party's term in power that railway networks were laid throughout the country and adding, "They issue statements and we perform."

The following are the newest wave of 21 AKP candidates announced by Prime Minister Erdoğan on Thursday: