Decision time for the Gulen movement 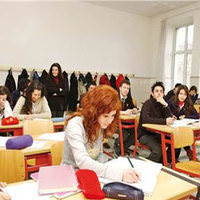 If the Gulen movement wants to serve society, they should restrict themselves to nongovernmental activities rather than using their bureaucratic influence to engage in politics.

The official documents disclosed last week in order to force the government to change their decision to transform the prep schools, took the Gulen movement affair to a whole new level. With the Gulen movement in mind, we should instead discuss social movements and politics during the era under some sort of tutelage and the way social movements need to interact with politics and the state during
the formation of the new Turkey in the post-tutelage era.

In our recent history, ties between the public and politics faced two important breaking points. Firstly, following the war of independence, the Kemalist administration, with their understanding of national will based on the principles of Rousseau, took upon itself the monopoly of government in the name of the people. The second breaking point occurred with the removal of free elections and the multi-party system. The national will provided by the 1961 Constitution was given to the control of the appointed bureaucrats. Both these periods, when the nation didn't have the right to influence the political process through democratic elections, can be defined through tutelage.

During these eras, which we conceptually named as tutelage, politics that should have been open to national participations was taken over by a single group. That's why many different social movements with varying political views saw this as the usurpation of the state by the Kemalist elite. This abnormal period, when the nation became estranged from the state and politics became functionless, also produced many strategic responses that not in line with democratic politics.Some movements turned to armed resistance, some sought allies within the armed forces and tried to assume power with coups, and some focused to organize within bureaucracy, trickle into the state, and obtain control of the it. The Kemalist takeover of the state, which had alienated the public, legitimized these efforts because politics was closed to national will. Many groups and organizations with varying political intentions adopted organizational structures that looked like movements.

The normalization of politics

After 10 years of relentless efforts, today this tutelage is at an end. Politics has become open to public opinion, the state has become owned by the people. In short, tutelage over politics and state is over. With politics opening to the nation and influencing the decision-making process, social movements that were organized with tutelage in mind are in need of change in strategy. Political history is full of examples of anachronic social movements that couldn't adjust to changing political times, those that opposed the flow of time and change thus harming themselves. In our recent history we have witnessed many movements with different political influences deal with the throes of change.
The Gulen movement is a front runner amongst organizations that is faced with the force to change its strategy that was defined by the era of tutelage. Since its founding, the Gulen movement has implemented two strategies. On the one hand, while forming an effective religion-based civil organization focused on providing services, becoming a successful example of an aid movement. On the other hand, like many movements formed at the time, it placed importance to infiltrating into vital
state institutions.

The opening of the channels between the society, politics, and the state caused radical changes firstly in political activities and mediums through which service was provided to the people. At a time when democracy is valid, and the barriers between the public and the state are lifted, the legitimacy of social movements is limited to their public effectiveness and influence. The sole way to make the state to truly belong to the people is to join politics through social channels with the use of democratic mechanisms, while being vary of bureaucratic obstacles. In this context, the state-focused strategy of the Gulen movement that was formulated nearly half a century ago, has lost its foundation. The only way for the Gulen movement to serve the public is to focus on civil activities and to abandon using their bureaucratic gains to influence politics.

Even though it hasn't earned the right or the legitimacy of making political decisions from the nation, its efforts to boost its influence through the use of the state's strategic institutions, is nothing but an effort to revive tutelage. Such efforts, by definition, is elitist and presents itself as a savior. This elitist character, does not feel the need for thoughts to be tested by the public through democratic process. It is because they don't have these needs that they can value their own opinions over those of a legitimate government. It was in the first years of the republic that the Kemalist elite with these intentions decided that they had the right to make these decisions in place of the public. The body of individuals selected to govern the country after the 1960 military coup also found their legitimacy in these Kemalist principles.

That's why the Gulen movement's insistence to retain its position in continuing to influence strategic government institutions seems like the two tutelage periods in the Republics history. In an era when ballots and many civil service channels are open, the fact that the Gulen movement is continuing to mobilize the resources it obtained during the previous abnormal period means that it is making a new bid for tutelage.

As this bid looks to narrow and hinder the country's process of democratization, it damages the foundations the movement built on. The respect the public has for the Gulen movement is not for their involvement in politics, but for the services they give to the public. The way of serving the public in a democratic system is clear and influencing it through its cadres in the state's strategic institutions is not it.

In the new Turkey, any organization that doesn't take their power from the people, that doesn't utilize the democratic process in the country, doesn't and shouldn't have the legitimacy to impact politics. The AK Party's attempt to stop the tutelage effort of the Gulen movement is necessary in the further democratization of the country. The Gulen movement's responsibility to its followers and the country is to turn away from its tutelage bid and towards serving the public.