“This has become a matter of national security” 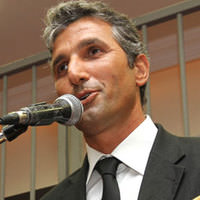 Nedem Sener, who was arrested and imprisoned for 1 year and 9 days before his release; spent the last two days telling Sabah about the similarities between the current police operation conducted on associates of the government and the one conducted on himself.

"One of the police that was expelled from his position was one of the ones that made the ridiculous fake record about me. There is no point in faking the records of people in office and lynching them.

When we spoke last week you said that the police created false evidence against you in order to tap you, could you elaborate on that?

People like Ali Fuat Yilmazer who did the Ergenekon operation, Ramazan Akyurek, and Faruk Sari from Trabzon Intelligence, and Muhittin Zenit who used to work at the Bayburt police station and now is stationed at the Ankara intelligence Ministry opened a case against me due to my book, "The Dink Murder and Intelligence Lies". I was being convicted of 20 years in heavy detention, and 12 years in a medium detention facility from two different trials."

The book was published in January 2009, and the case was opened in April. In May the police received information in an email from a man named M. Yilmaz. I am still certain that this information received by the police was totally fake. This information stated that I was in the propaganda division of Ergenekon, that I formed a group with Hakan Altunay from the Open Society Organization, and a Bogazici Professor, that I organized dark propaganda events, that we were collecting information on a group including the Prime Minister's son Bilal, and that we planned a quick assassination for Prime Minister Erdogan.
They were informed that this assassination would resemble the Dink murder. In this piece of information there were also many names that were already arrested for involvement within Ergenekon. The police took their own piece of fabricated evidence and went to Zekeriya oz. Oz then went to relay this evidence to the court.

Didn't you write that these same police were investigating the Dink murder?

I did. Yes, and in-fact I had signed a report for the Prime Ministry to be given to PM Erdogan in 2008 about their involvement. The Prime Minister at the time did what he had to and action was taken. In my book I included this report, the signatures, I had put their responsibility in the matter into open air. I mentioned their indictments and they were under investigation for their public roles, but still there was no progress being made.

They used this serious allegation of to just wiretap me and they didn't even open investigations on the others that were named.

"To punish me for the book that I wrote…"

But surly your lawyer must have pointed this out?

When I was detained and when it was discovered that this informing letter was in the investigation folder, Hakan Altunay's lawyer Fethiye Cetin appealed to the Ergenekon prosecutor Cihan Kansiz. He asked them, "Our client's name has been mentioned in some intelligence, the person named M. Yilmaz has acted in insult and the fabrication of crimes, did you engage in tapping my client, who are these people, did you open an investigation on this?" One day later Cihan Kansiz gave them a document stating no processes were undertaken. I stated all of these during the trial. While the police were trying to punish me with the trial, the prosecutor of the court I was tried in and miss-prosecutied by Celal Kara. Celal kara who gave his observation on my punishment by court, after the trial was dismissed stating that I was being punished for my book.

You are saying that your book caused much controversy?

In short, it was a revenge operation due to me publishing the responsibilities behind the Dink murder. The prosecutor, Oz, became a tool for this during the trial. Two six month periods of tapping were implemented. Later these should have been disregarded. The request for a third period of tapping was rejected by Zekeria Oz, Murat Yondem and one other prosecutor because the previous two produced no results, releasing a document stating this.

Was the tapping records thrown out, do you know anything on this?

The records which contained no evidence of any crime were not thrown out by the prosecutor. The police also did not throw them out. These unlawfully collected records were used one and a half years later in the Oda TV operation. They stormed the Oda TV offices on the 14th of February. The records of me that should have been thrown out were deciphered posthaste-fully in an operation spanning from midnight to 6am a month before the raid. Before the Oda TV operation began, they deciphered the recordings without knowing what they would find, and later, after the operation was done, on the 3rd of March, I was detained and the recordings were presented to me. Now how do I know that this was done by the police and not the government?

I do not think that the Prime Minister had any idea that we would be arrested. He might have known about the Oda TV operation, but I do not think he had any Idea that we would be arrested. I was detained on the 3rd of March and arrested on the 6th. On the 8th of March (2 days after the arrest) the police commissioner that had composed this operation, Ali Fual Yilmazer, was expelled from his position by the order of the ministry at 3 am. But we know that later, the same team that did this operation, was called by the Deputy of MIT (National Intelligence) and signed onto the operation known as the 7th of February coup attempt against the Prime Minister. Some of the chiefs of police held meeting with some journalists in their houses. We know this from the arguments that they witnessed. All that I did was state that these police, along with MIT and the gendarmerie were responsible for the Dink Murder. I am by profession a journalist, but I came face to face with a very large police cover-up. I saw that it was a revenge operation against me from what I learned from the officials at the ministry of justice. The information from them, as well as those I obtained from those close to the Prime Minister indicated this.

In recent times it is being said that prosecution and police investigations have become a junta run force. How do you evaluate this interpretation with your experiences in mind?

There is no need to use military terminology such as junta. It is in the open that there is a Gulen Movement based structure within the police force. Moreover one of the police that fabricated the ridiculous evidence against me was among the (5) that were dismissed earlier (this week). They made an operation in the early morning hours without the knowledge of Huseyin Capkin (the Istanbul Chief of Police). The officers involved were informed of the addresses for the raid in the cafeteria by sealed envelopes. It is obvious that there is this sort of structure here. If you intend to conduct misguided operations, there are legal ways to do so. To those that try to preach that prosecution is independent: how can a prosecutor possibly open a case without it being registered within the National Prosecution Web Network System? How can police act without informing their superiors? Why were crews from Istanbul sent to conduct arrests in Ankara? Does one department of the state not trust the others? How can we know that those that suspect others are themselves trustable? Alas there is now lawfulness here. There is no need for a junta, when observed, those that are involved, claiming disinformation as accurate intelligence, when who is involved is examined, the Gulen Movement's involvement is in the open. It is visible how when one center pushes a button and following branches mobilize to effect politics. Could someone please explain a logical, intelligent and politically strategic reason why Hakan Suker reigned from his office? When we interpret this all in one frame, everything comes within plain sight.

"The lynching which resulted…. From boxes with 4.5 million dollars"

Upon examining the newspapers (from earlier this week) many assumptions are made, the figures are all up in the air. Based on how your investigation was reflected in the media, what can you say about this situation?

It is very similar. 4.5 million dollars in a shoe box… the numbers for the bribes given and taken, the managers, this that… I was also victimized by this. There is no point in faking the records of people in office and lynching them. Could there have been misguidance, there could have been, could there have been bribes, there could have been. Do politicians enter these workings, they do. If there are so many among the guilty and one among the innocent what am I to do? Should I join the chorus and lynch them in bulk? No, I lived through this myself.

They said that "he is a liar, a terrorist, what will be exposed, he wasn't arrested for journalism" about me. Forget the lies of journalists, this was done by a government prosecutor. I told them, "whatever you have, put it forth" and they did nothing. Could part of the accusations be true? It is possible, we do not know these people. I believe the logic behind causing a ruckus with the chorus is wrong. To get political results you will examine files to see where it went astray, there is no other way to yield healthy results. Misguidance is corrected and exposed through in depth internal investigations by the state. The current lynching atmosphere in the media does not seem healthy to me, for I experienced it.

The investigation file was not registered into the National Prosecution Web Network. The Mayor, and the chief prosecutor had no idea. There are assumptions that some details have been shared with some journalists and former police officers. How should this be evaluated?