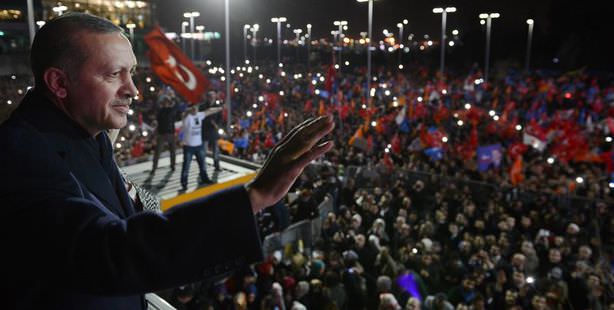 A survey by a local polling company shows the ruling AK Party will secure another victory in the upcoming local elections.

The ruling Justice and Development Party (AK Party) will win 47.1 percent of the votes in the local elections in March, according to a survey published yesterday. Ankara-based AN-AR polling firm said the local elections on March 30, 2014 will see opposition Republican People's Party (CHP) trailing AK Party by securing 26.9 percent of the votes. The far-right Nationalist Movement Party and the pro-Kurdish Peace and Democracy Party (BDP) will enjoy 14.5 and 7.6 percent support respectively.

The survey was conducted between Dec 6 and 17, 5,257 participants across the country answered the relevant questionnaire. According to the study, AK Party will maintain a comfortable lead by securing 49.3 percent support, with the CHP getting 28.7 percent of the vote.

AN-AR survey results show that AK Party will secure yet another victory in the upcoming March 2014 local elections, which many believe will provide important clues about the presidential race later next year.