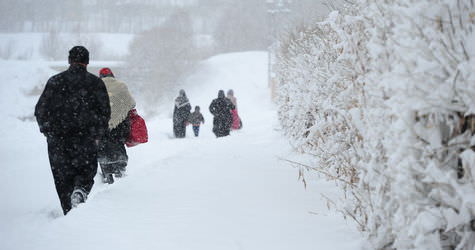 The East Anatolia of Turkey shivered through the deep freeze as temperatures in Van dropped to -38C and Ardahan saw temperatures about -25C degrees. Forecasters warn people against frosting as icicles pose a significant danger for citizens.

Deep freeze bore down on East Anatolia. The coldest temperature reported in Van was minus 38C. Temperatures plummeted to minus 25C in Ardahan. The city center in Agri received 16 cm of snow while Erzurum barely reached 10 cm. Automobile gas tanks, fountains, streetlights, running waters in the region froze.

The harsh cold weather brought life to halt in East Anatolia. Citizens walked on frozen pavements with difficulty. Highways suffered disruption as ice and freeze hit the region. Buffalos and donkeys were frozen because due to the 'life-threating' weather conditions. Disregarding the risk of injury, children played football on the frozen Murat River.

The heavy fog, on the other hand, hit the entire country. Flights that were due to take off in the morning were cancelled as a result of the heavy fog at Adnan Menderes Airport in Izmir. Visibility was reduced to less than 20 meters in Kocaeli.The areas affected by heavy fog include Istanbul; the Bosphorus sea traffic was interrupted for a long time due to heavy fog.

While East Anatolia is struggles to cope with the deep freeze, the residents in Antalya continue to enjoy sunny weather. The temperature reported yesterday afternoon in Fethiye, a tourist destination in Mugla was 23C as Antalya's city center reached temperatures of approximately 17C. The temperatures of the sea water along the Antalya Mediterranean sea coast reached 18C.
Last Update: Jan 07, 2014 3:00 pm
RELATED TOPICS