Plans for free trade deal between Singapore and Turkey 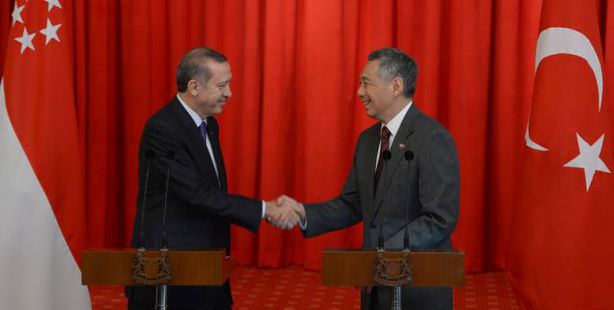 Trade volume between Singapore and Turkey expected to reach $5 billion with the initiation of negotiations for free trade deal agreement between the two countries.

The next stop on Erdogan's East Asia Tour following Japan, with the agenda to discuss bilateral economic relations and build a common outlook on international matters was Singapore. Singapore Prime Minister announced that the two countries will commence negotiations under a Turkey-Singapore Free Trade Agreement.

In previous discourses, Erdogan had mentioned Turkey's interest in becoming a partner with the wealthy Southeast Asian state, boasting a highly developed market economy based on trade. Erdogan gave the signal that trade volumes between the two countries will reach $3-$5 billion.
"I am confident that we can forge useful alliances and partnerships with Singapore, particularly with respect to the wide-scale infrastructure and energy investments going on in Turkey," said Erdogan.
He further touched on the strategic importance of both countries and described them as being "gateways to opportunities in their respective regions."

Singapore, the only Asian country to have a AAA credit rating is also the 14th largest exporter and 15th largest importer on a world-scale. This is also a reflection of the importance of trade on Singapore's economy.

Upon conclusion of his diplomatic visits, Erdogan toured the Orchid Garden in Singapore's Botanical Park. As a show of respect, a new variety of purple-colored orchids were named after Mr. and Mrs. Erdogan as the "Dendrobifm Tayyip-Emine Erdogan" flower. Erdogan flew to Malaysia, the last leg of his 5-day East Asia tour, this afternoon.