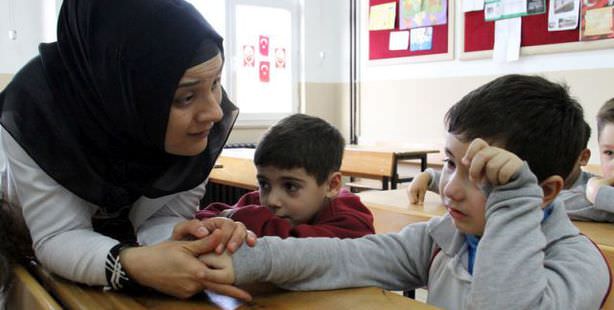 Doctor Fatma Guzel from Samsun Ilkadim Public Health Center says, “Many people said that I wasn’t capable of studying medicine, but I was determined to become a doctor and here I am.”

Turkey was touched by the fascinating story of a courageous girl, Fatma Guzel becoming a doctor. Despite many setbacks compared to her peers, such as hearing difficulties, economic adversity and discouragement of the environment, she persevered in her goal, believed herself when nobody else did and succeeded by graduating from Selcuk University Medical School. She now works at the Samsun Ilkadim Toplum Sagligi Merkezi (Public Health Center) and says, "Many people said that I wasn't capable of studying medicine, but I was determined to be a doctor and here I am."

Fatma Guzel was the third of Sidika and Mevlut Kaynarca's five daughters and had a hearing loss of 82% in one ear and 78% in the other since the inflammatory disease she had when she was seven months old. She has been using a hearing aid since she was 11. She started the elementary school without any hearing aid and learned to lip-read with the help of her class teacher. Fatma refers to her teacher, Nurten Yeslioz as her "second mother" and says, "When my teacher realized I couldn't hear her, she started to talk in front of me. I completed elementary school reading her lips."

Fatma continued her education through high school and won Selcuk University Medical School in the first university exam she participated in 2000. Although she had some trouble due to huge lecture halls, she managed to finish medical school and became a doctor. However, her struggle did not end there.

Fatma explains the problems she encountered as follows: "I passed the exam at my first attempt and chose to apply top medical schools only. However, when I started the medical school they questioned how I could become a doctor with a hearing disability and wanted me to bring a medical report stating my capability to study medicine. The first three years were a real challenge for me. Even if I sat in the front row, the distance from the lecturer was very far for me and since the lecturer walks around the room, it is impossible to catch what he/she is saying. My hearing aid wasn't working very well either, so the first three years were really hard to cope with. After my third year at university, my hearing aid was completely broken and I couldn't renew it since I didn't have social security or health insurance. My family was unable to afford a new hearing aid for a few years and I finished my third year in five years, yet I never felt discouraged during those five very long years. I completed medical school with the help of my hearing aid and ability to read lips in ten years."
Last Update: Jan 11, 2014 6:40 pm
RELATED TOPICS