Heavy traffic in the Bosphorus and the Dardanelles 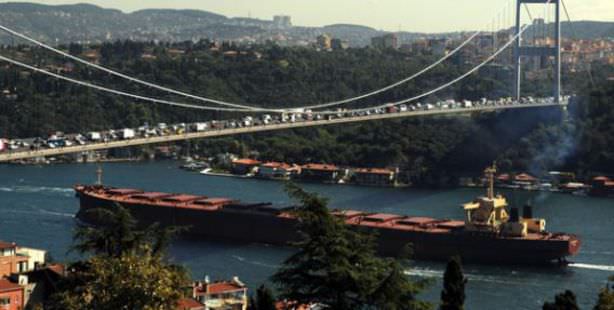 With 90 thousand 421 vessels crossing the Bosphorus and the Dardanelles in 2013, the dire need for projects such as Channel Istanbul becomes evident.

According to the information provided by the General Directorate of the Ministry of Transportation, Maritime and Communications to a correspondent of Turkish news agency Anadolu Agency (AA), in 2013, 46 thousand 532 vessels crossed the Istanbul Bosphorus and 43 thousand 889 crossed the Dardanelles.

9 thousand 625 ships with an overall length in excess of 200 meters and 18 thousand 305 tankers have passed through Turkey's straits. 42 thousand 946 of these vessels required pilot ships to guide them through the most important and busy maritime transportation hubs of Turkey and its nearby geography. According to a report from the Coastal Safety Department, there was only one collision, three shipwrecks and one incident of fire in the Dardanelles along with two collisions and five shipwrecks in the Bosphorus, none of which were fatal.

These figures indicate how important and busy Turkey's straits are in terms of maritime transportation, linking the Mediterranean to the Black Sea region. Moreover, the need for the implementation of the "Channel Istanbul" Project, a massive project to construct an artificial water passage on the European side of Istanbul, connecting the Marmara Sea to the Black Sea becomes evident and more urgent. The aim of the project is to reduce the number of transit vessels passing through the Bosphorus. Although this "crazy project", as labeled by certain media outlets, has been in discussion since the 16th century, due to its magnitude and cost, never kicked off until today.

The project was first announced in 2011 by Prime Minister Recep Tayyip Erdogan and faced strong objections from environmentalists and the main opposition party. It is planned to be completed in 2023, with two new mega towns to be built on each side of the channel and the total cost is expected to be around 20 billion Turkish liras.