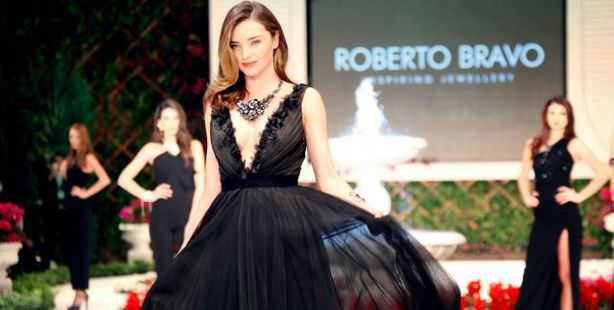 Famous model travelled to Turkey to attend a fashion show at the Expo Center in Antalya. The Aussie star wore a stunning elaborate diamond and pearl necklace worth $3 million.

Italian fashion brand Dosso Dossi organized a fashion show at the Antalya Expo Center between 08-11 Jan, 2014. This year the event takes place for 9th time and aims to once again gather local manufacturers and regional companies.

The famous model was seen arriving at the airport in a grey coat, black-and-white stripe sweater and black skinny jeans, completing her travel look with black ankle boots and Givenchy's 'Antigona' tote bag. Due to extreme cold weather in USA, Kerr arrived with a delay of four hours and seemed to be tired and didn't want to give photos at the airport.

As expected, she shone on the famous Italian jewelry brand Roberto Bravo's parade with the lead piece of the collection, a diamond and pearl necklace worth $3 million. The parade was followed by an audience of 5000 and Kerr was the most striking memory along with Bravo's stunning necklace.

Roberto Bravo's designers worked tirelessly for 3 months in order to design the set Miranda Kerr had carried. They have used exactly 2014 pieces of perfect cut diamonds. The set gained great recognition with its diamonds and precision of design. Due to the high value of the set, extreme security measures were taken by the organization management.

Originally from Australia, the model was due to come for the Dossa Dossi Fashion Show in June 2012, but due to a last minute problem she cancelled her attendance. However, she kept her promise to come for the Dosso Dossi Fashion Show 2013. Miranda Kerr already walked at the opening parade and according to CEO Eraslan, she will wear pieces from four different collections during the fashion show.

Avoiding the use of usual catwalks for the parade was another original approach that was taken for the Dosso Dossi Fashion Show. Instead, the catwalks were designed in the concept of a "palace backyard" and the periphery of the stage was planted with 70,000 fresh flowers.

The Dossa Dossi Fashion Show is a one week show and gives its participants the opportunity to have a wonderful vacation while seeing the latest trends in the fashion industry as well as having a unique shopping experience.

A former textile entrepreneur, Hikmet Eraslan has created a unique system for Dosso Dossi, based on his own experiences on the hardships in the textile industry. He says, "Companies that attend as buyers from 5000 firms in 30 countries, guarantee a purchase of $15 thousand each and secure a one week vacation with their families in Turkey." He adds that he too has experienced difficulties similar to the entrepreneurs in the textile industry and that he created this system based on his experiences. He says that such organizations allow local textile companies get the chance to introduce their products to foreign countries.

Primary participants of the fashion show are producers from Osmanbey, Merter, Caglayan in Istanbul and many others from all corners of Turkey. 5000 buyers from 30 different countries are expected to spend $40 million in one week. Eraslan said that they have been organizing the Dosso Dossi Fashion Show twice a year since 2005 and each year the number of participants has increased by 70%. Producers hire stalls to display their products and buyers have the opportunity to choose from various options and purchase at wholesale prices.

Dosso Dossi Fashion Show participants can achieve a turnover between $100,000 and $2 million whereas buyers purchase an average between $15,000 and $400,000. Some of the well-known producers who participate in the show are Balizza, Gizia, Piena, Behcetti. Buyers are predominantly from Russia, Ukranie, Armenia, Kazakhstan, Azarbaijan, Portugal, US, Lithuania, Iran and Saudi Arabia.