Villagers dig holes in the frozen lake for fresh water 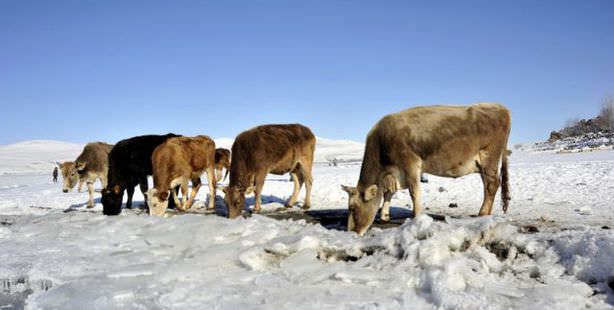 After a month of extreme cold weather, villagers in Bitlis have started to break the ice on Nazik Lake to help animals access drinking water.

Villagers from Dilburnu, Ahlat from Bitlis are breaking the ice layer on Nazik Lake in order to help animals access drinking water. Eastern Anatolia has been under the severe influence of freezing cold weather for almost a month now and all the animals are affected as much as humans, if not more by this breathtaking cold weather.

The cold weather has also affected the Nazik Lake in Ahlat. The lake is frozen and both domestic and wild animals around the lake had difficulties finding fresh drinking water. Villagers from Dilburnu, which is near the banks of the lake, found a solution to the problem: they broke the ice layer on the lake in order to get water for their livestock.

Villagers have to pierce the ice layer, which can reach up to 60 centimeters in order to access fresh water for their animals. Cemal Karadogan, who earns his living through livestock farming said, "We bring our animals to the lake in summer, because there is no other water resource in our village. So in winter we need to bring the water to the animals."

He adds, "Every day we dig up holes in the ice and bring our animals here for fresh drinking water. It also helps the wild animals around the village too, since they don't have any other water resource either. Yet, every night the lake freezes over requiring us to dig holes as deep as 60 centimeters again the next day."