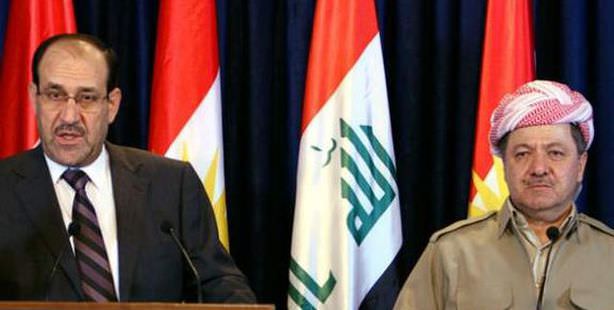 Tensions rise as Iraqi PM threatens to cut government funding for the autonomous Kurdish region to discourage plans to export oil and natural gas to world markets through Turkey. Turkey prefers to keep a safe distance and has confidence that the Iraqi government and the Kurds will reach a solution.

Despite tensions between Iraq's Kurdistan Regional Government (KRG) and the Iraqi central government over the budget allocation of oil exports to Turkey, Ankara remains calm and expects that both sides will reach another agreement soon.

Prime Minister Nouri al-Maliki of Iraq escalated existing tensions over a proposed oil and gas pipeline deal between Turkey and the Kurdistan Regional Government (KRG) on Sunday, as he threatened to cut central government funding for the country's autonomous Kurdish region to discourage Kurdish authorities from its plans to export oil and natural gas to world markets through Turkey without Baghdad's approval. Last Wednesday, the KRG's Ministry of Natural Resources had announced that they began shipping crude oil to Turkey, which is expected to start exporting Kurdish oil by the end of January 2014. Moreover, Iraqi Deputy PM Hussain al-Shahristani on Sunday, summoned Turkish chargé d'affaires Efe Ceylan to protest the pumping of oil from the Kurdish region to Turkey without the approval of the central government in Baghdad.

The Iraqi government and the KRG reported yesterday that they failed to reach a consensus over the annual budget allocated to the country's northern region and the distribution of oil income from exports to Turkey. The announcement was made yesterday after a meeting in Baghdad between KRG Prime Minister Nechervan Barzani, Iraqi Prime Minister Nouri al-Maliki, Iraqi Deputy Prime Minister for Energy Affairs Hussain al-Shahristani and a delegation of Kurdish deputies from the Iraqi Parliament. At the meeting with Prime Minister Barzani, the al-Maliki government expressed their serious concerns over the KRG's unilateral decision to export crude oil without Baghdad's approval.

Amidst tensions between Erbil and Baghdad, Turkish authorities seek to keep a safe distance, high-level sources from the Turkish Ministry of Foreign Affairs stated on Monday, noting that they expect the two parties to reach an agreement soon. "We will abide by the existing agreement that the KRG signed with the Iraqi government," another source added.

With regard to the ongoing dispute, Turkish Minister of Energy Taner Yildiz remarked on Monday that "the important thing now is to conclude talks between Baghdad and Erbil. They should not try to involve Turkey in their issues. We believe that they will come up with a solution." Yildiz reiterated Turkey's willingness to contribute to reconciliation efforts.

The central government and the Kurds differ over interpretation of the Iraqi constitution's references relevant to the distribution of oil revenues. The US-led invasion of Iraq in 2003 allowed the Kurds to control a 17 percent share of oil revenues, although Kurdish authorities frequently complain that they receive less than their rightful share. In October 2012, Kurdish authorities agreed to export an average of 250,000 bpd over 2013 if Baghdad agreed to compensate regional operators. Tensions increased as the Kurds stopped pumping oil via the Baghdad-controlled pipeline to Turkey, instead exporting smaller quantities by trucks and claiming the revenue directly.

KRG authorities forecast that up to two million barrels of crude oil will flow through the pipeline within the month while the monthly volume will increase to 10-12 million barrels by the end of the year.