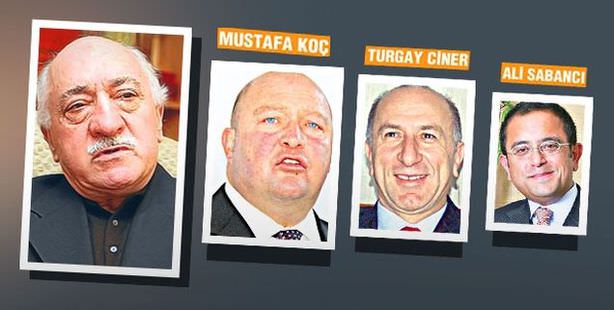 Recently audio recordings of Fethullah Gulen and his men speaking over the phone was leaked to the internet. The shocking details of the nature of the Movement’s network have surfaced through these recordings.

The reprehensible audio recordings of Fethullah Gulen, the movement leader living in the US have been revealed. Recordings include Gulen giving orders on tender dealings, directing the money traffic and sending messages to businessmen and media patrons. The recordings also seem to include some kind of coding.

Uganda Refinery Tenders:
-Sir, the Uganda President reported. There is a refinery deal. Shall we offer it to Koc? GULEN: If it's offered to someone who will do as we say, that would be better. Otherwise, we can offer it to them.


Was Tupras finished by the movement:
-Sir, Mr. Koc called. Mustafa Koc. He would like to offer sponsorship. Adnan Polat also called.
Gulen: Good. Despite investigations (re the Tupras investigations), they couldn't find anything on them. They get tips. Keep the big boss unaware of our contact.

The movement's Gold:
-Sir, one of our major clients bought them (cash withdrawals from Bank Asya). If more is withdrawn, it will pressure the bank. What if we spoke to them duly?
Gulen: The thing you have, will that not work? (Referring to the gold in the possession of the movement)

Ali Sabanci- Turgay Ciner:
-Ali Sabanci enquired most about your health. We visited Turgay Ciner. He confirmed, "Nothing against our sir will be published in this newspaper".
Gulen: Very good. May God bless him.