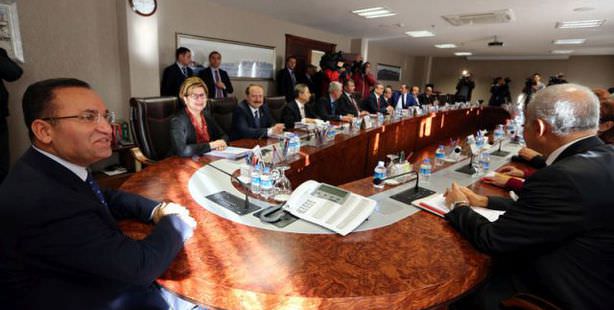 Will Turkey’s longing for an EU-style judiciary be appeased? As the bill designed to reform Turkey’s judiciary continues to stir controversy, President Gul steps in to resolve the dispute.

The ruling Justice and Development Party (AK Party) has introduced a Judicial Reform Bill to reform the Supreme Board of Judges and Prosecutors (HSYK), a judicial authority that oversees the appointment of judges and prosecutors and investigates ethical breaches, has been partly accepted and is still being discussed by the Parliament's Justice Commission.

Articles 4, 5, 12, 17 and 25 have been removed from the bill consisting of 52 articles and 20 articles have been accepted with the majority of votes. Later today, the Parliament's Justice Commission will continue discussions that started last Friday for the remaining 26 articles.

Turkey's president, Abdullah Gul held three meetings yesterday with the leaders of opposition parties to help solve the dispute. President Gul's first visitor was Kemal Kilicdaroglu, the leader of the main opposition party, Republican People's Party (CHP), to voice their concerns over the bill. After his meeting, Kilicdaroglu told reporters that CHP's main concern is to prevent political intervention into the judiciary and that they would like the judiciary to remain independent. "What we want is a judicial system that is free of political intervention and compatible with EU and Venice Commission standards," Kilicdaroglu said. It was also noted that Gul and Kilicdaroglu discussed the amendment of the Constitution and that the President is in favor of amending the Constitution and would like the support of opposition parties in this respect. Gul also received Erdogan after his meetings to discuss the bill.

Today, the ruling AK Party has also taken a step towards the resolution of the conflict. The Minister of Justice, Bekir Bozdag and AK Party Group Deputy Chairman, Nurettin Canikli paid a surprise visit to the Group Deputy Chairmen of the main opposition party, Akif Hamzacebi, Engin Altay and Muharrem Ince to further ensure that the conflict in the parliament is resolved. The visits came following yesterday's heated debates at the Parliament, where tension was high between the members of the main opposition party (CHP) and AK Party, resulting from time to time in violent disputes. The discussions between the parties will be based mainly on Article 159 of the Constitution regulating the structure of HSYK.

The bill comes in response to the institution's poor handling of the Dec 17 operation and HSYK's various attempts to overstep its constitutional mandate. It stirred a heated public debate between the Executive and the Judiciary. Prime Minister Recep Tayyip Erdogan referred to the Dec 17 operation during which 34 people including the sons of three cabinet ministers, head of the state-owned Halkbank and few businessmen were detained, as an "assassination attempt" on his government and a "judicial coup". Osman Can, a senior AK Party official and former rapporteur of Turkey's Constitutional Court, echoed Mr. Erdogan's sentiments last week as he warned that certain elements within the judiciary might experience a conflict of interest between their professional roles and faith networks.

The HSYK has issued a series of public statements outside of its legal mandate since late December. Initially, the Supreme Board protested the government's decision to amend the judicial police regulation as unconstitutional while noting that the changes violated key principles, including the separation of powers and judicial independence.

If adopted completely, the AKP-sponsored bill will designate the Minister of Justice to serve as Chairman of the Board. The proposed legislation also seeks to restructure the HSYK to establish an 11-member Board of Judges, as well as a 7-member Board of Prosecutors. Should the bill be adopted, it will expand the influence of the Parliament and the Minister of Justice over the selection of HSYK members.

Highlighting the need for intra-judicial supervision, Minister of Justice Bekir Bozdag remarked on Wednesday that the HSYK bill seeks to "promote the HSYK's accountability before the judiciary" and stated that it is out of question to withdraw the bill on HSYK.

While some commentators and jurists claim that the proposed legislation would violate the Constitution, Deputy Prime Minister Besir Atalay assures that, "There is nothing unconstitutional in this bill. This has been considered very carefully." He asserted that the only subjects under review are those that the article on HSYK leaves to the law, given the constraints placed by the constitution.
Prime Minister Erdogan also commented that the Justice Commission confirmed that the proposed reforms were in line with Turkish law. "The commission has done its work and has ruled that there is no violation of the constitution," Erdogan remarked.

Further examples in EU Countries reveal that members of the high council are widely chosen by Parliaments.

France: The High Judicial Council is composed of 22 members. The President, Speaker of the Assembly and President of the Senate have the right to appoint a total of 6 members to the council.

Portugal: The High Council has 15 members. The President elects two members and the Parliament elects seven of them.

Sweden: The government appoints all 11 members of the High Council.

Italy: The Parliament selects eight members of the High Council from a total number of 27.

Netherlands: All five members of the High Council are nominated by the Minister of Justice and appointed by the King.

Spain: Apart from the President of the Council, all 21 members are nominated by the Senate and appointed by the King.