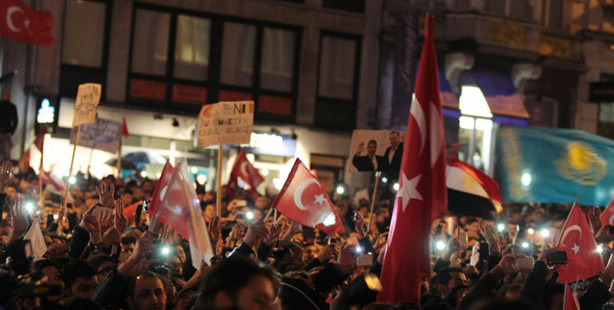 Erdogan said that the whole world watched how tens of thousands of people were massacred by the Assad regime.

"Will we remain silent about the situation in Syria where 150,000 people were killed? We need to stand together against this atrocity. The whole western world needs to raise their voice," Turkish Prime Minister Recep Tayyip Erdogan said on Monday referring to images and a report by a team of senior war crimes prosecutors obtained by Anadolu Agency that show the systematic killing of nearly 11,000 detainees at the hands of Syrian regime forces.

Addressing a crowded group of Turks at the Stephanie Square in front of his hotel, who came to welcome the Turkish PM to Brussels, Erdogan said that the whole world watched on TV how tens of thousands of people from all ages, including women and children were massacred by the Assad regime.

"The Geneva II conference is starting tomorrow (on Wednesday). ... We are calling on them ( Geneva II participants) to raise their voice against thismassacre in Syria," Erdogan said.

Noting that these photos reveal how tens of thousands of people including children were killed by chemical and conventional weapons, Erdogan said that there are around 700 thousand Syrian refugees in Turkey.

"The number of refugees in Lebanon is one million, and there are about 500 to 600 thousand refugees in Jordan. We have always followed an 'open door policy' for these people, and will continue to do so," Erdogan said.

"We must stand together against this atrocity. The whole Western world and humanity needs to raise their voices. I believe that Geneva II will be the place where these steps will be taken," Erdogan concluded.