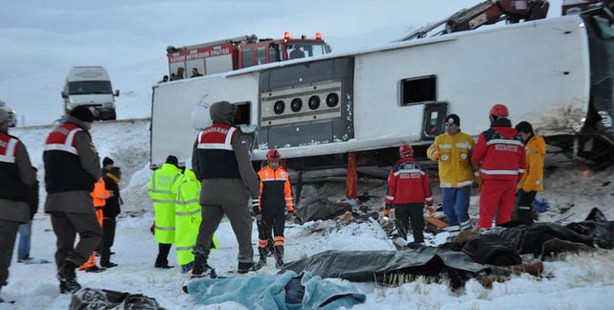 A deadly traffic accident took place near Kayseri, a central Anatolian city in Turkey. The bus belongs to a Muş-originated firm, whose plates read 34 DG 5950. The driver, Ertuğrul K., lost control of the vehicle due to icy road conditions and heavy snowfall and tumbled off the shoulder of the road and into a ditch.

Initial reports say 21 people died in the accident: 13 men and 7 women. A child is also among the dead. According to Kayseri 's Health Director, Dr. Ahmet Öksüzkaya, 29 people were also wounded and taken to several hospitals in the district after the initial treatment by the first responders. Seven of the wounded are in critical condition and being treated in the Erciyes University Medical Faculty Hospital. "The death toll is expected to rise." said Öksüzkaya.