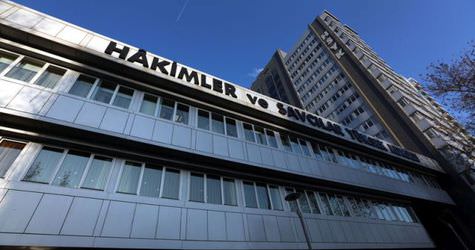 Prime Minister Erdoğan’s efforts to compromise with opposition parties regarding the constitutional amendment to reform the judiciary failed to yield positive outcomes. The debate has been postponed for the time being.

The Grand National Assembly of Turkey indefinitely postponed the debate on the judicial reform bill seeking to restructure the Supreme Council of Judges and Prosecutors (HSYK) among other institutions following a week of high tension. Commenting on opposition parties' objections against the bill, Prime Minister Recep Tayyip Erdoğan stated yesterday afternoon that his party "will postpone the debate for the time being" while rejecting claims that the bill would be withdrawn altogether. "We might bring the bill back to the General Assembly if we so require," he added.

The AK Party-sponsored judicial reform bill has been at the heart of a major controversy since its introduction on Jan. 7, 2014. The Turkish Parliament's Constitutional Commission adopted a slightly revised version of the original bill on Jan. 16, while the General Assembly began deliberations on Tuesday. Amidst opposition parties' claims of unconstitutionality, the General Assembly agreed on Friday, Jan. 24, to postpone the debate after the first 24 clauses. The bill was originally expected to receive the Parliament's approval by Jan. 26 before submission to President Abdullah Gül to be signed into law.

Disagreements over the AK Party-sponsored judicial reform bill caused high tension at the Parliament's General Assembly. On Jan. 23, CHP deputy Bülent Tezcan was hospitalized following an injuryduring a brawl with AK Party deputy Oktay Saral, who punched Tezcan after a heated argument with the CHP deputy. While Prime Minister Erdoğan criticized the opposition's hostility toward the AK Party clauses during the hearings by stating that "everyone should avoid such provocations," President Gül issued a statement over the incident noting, "We must first reform the language we use. I hope this will be the last such instance and such incidents will not happen again."

Following the AK Party leadership's decision to postpone the debate on the issue, main opposition Republican People's Party (CHP) Chairman Kemal Kılıçdaroğlu said that halting deliberations was "the right decision." Kılıçdaroğlu further added that "either the postponement or suspension of the bill represents a gain for democracy."

In light of the most recent twist in the HSYK story, sources from the Parliament commented that AK Party is likely to seize this opportunity to rekindle talks with opposition parties in the hopes of reaching a compromise. "AK Party deputies might sit down with their colleagues to discuss their expectations from the judicial reform bill over the weekend," a Parliament official stated. A potential settlement between the AK Party and opposition parties over the bill might lead to a series of constitutional amendments, another source at the Turkish Parliament added on Friday.

The government-sponsored bill was one of the hot topics during the prime minister's visit to Brussels on Jan. 21, where he met with key European officials to speed up Turkey's membership process. Prior to the visit, EU officials repeatedly expressed their expectation that the proposed change would not call into question Turkey's commitment to the Copenhagen criteria. The European leadership also shared their concerns over the judicial reform with Erdoğan, who later commented that "70 percent of the EU's concerns had been addressed," while the rest would be discussed in coming days. EU Commission Chief Jose Manuel Barroso and president of the European Council, Herman Van Rompuy reportedly expressed their satisfaction with the Turkish leadership's position during meetings with the Erdoğan administration.

Meanwhile, the Turkish media reported on Saturday that Štefan Füle, European Commissioner for Enlargement and European Neighborhood Policy, wrote two letters to EU Minister Mevlüt Çavuşoğlu on Jan. 14 and Jan. 20 to express his concerns regarding the bill. Mr. Çavuşoğlu reassured his counterparts last week, drawing attention to the need for the European Union to compare proposed changes in Turkey with similar practices in its member states. "The proposed changes to reform the country's Supreme Board of Judges and Prosecutors meet those standards," he said.

In light of changes to the government's judicial reform bill at the Constitutional Commission and the General Assembly, some jurists stated that the proposed changes would not represent a violation of the Turkish Constitution. Osman Can, a professor of constitutional law and former Constitutional Court rapporteur, concurs with this position. "From my point of view, the amended HSYK bill does not violate the Constitution, it rather positively meets the criteria set forth by the Venice Commission," Prof. Can stated. "There is a parallel organization in Turkey that uses laws as a smokescreen. Under these circumstances, lawmakers should take necessary measures against this organization," he added. While Can pointed out that certain provisional articles may be legitimately criticized, the current debate demonstrates that Turkey finds itself at a point that strongly resembles the legal reforms of Spain and Austria in the 1970s and the 1980s where peculiar political circumstances rendered provisional arrangements necessary.