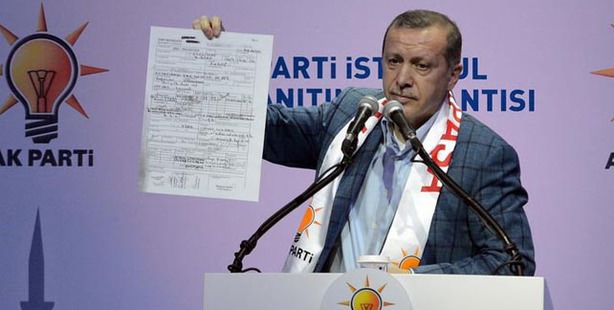 Turkish PM Erdoğan slams main opposition CHP for their wrong choice of Istanbul candidate for mayor and their visit to see Assad during the civil war.

Speaking at a press conference to introduce AK Party's mayor candidates for the Turkish capital Ankara, Prime Minister Recep Tayyip Erdoğan slammed the main opposition Republican People's Party (CHP) for their stance on the Syrian civil war, the Dec. 17 coup attempt and their Istanbul choice of candidate for mayor. Erdoğan also criticized the president of the Turkish Industry and Business Association, Muharrem Yılmaz for his latest remarks on Turkey's political situation.

Yılmaz had expressed his concerns on the recent problems in Turkey, especially with regards to the separation of powers and judicial independence and warned that such political turmoil will push away global capital and result in the withdrawal of investments from Turkey. Erdoğan responded to Yılmaz's concerns with harsh criticism for undermining Turkey's economy and power. "TÜSİAD's President is portraying a completely different view of Turkey," he said.

TÜSİAD's lack of interest in the latest coup attempts by the Gülen movement was also under Erdoğan's radar. Gülenist influence in the judiciary and various governmental bodies and the tapes revealing the blackmailing of major businessmen in Turkey by Gülen had recently been exposed. Accusing certain TÜSİAD members for gaining benefits from Gülenist minions in high positions, the prime minister said: "TÜSİAD has not been a supporter of the government's battle with the parallel organization trying to establish itself within the state. Nor did they stand by the government during the recent coup attempts. If you fail to stand up against coup attempts, you will be standing up against us, in other words, you are betraying your country."

CHP's current choice, Mustafa Sarıgül, who was deported from the party due to a corruption scandal, as their mayoral candidate for Istanbul was also criticized by Erdoğan. "You were proud, posing in front of Sarıgül's corruption file," Erdoğan said, addressing CHP's leader, Kemal Kılıçdaroğlu. He challenged Kılıçdaroğlu to reveal the contents of Sarıgül's file. "Either you reveal them or I will," he said. CHP's stance on the recent Dec.17 operation, their objection to the government's proposal to reform the structure of the Supreme Board of Judges and Prosecutors (HSYK) were also rebuked by the prime minister. Erdoğan further accused CHP of being in support of the Assad regime side since they have not taken a clear stand against Assad: "Visiting Assad in Syria while the civil war continued means you approve of the atrocities taking place in Syria by the hand of the Assad regime."

Prime Minister Erdoğan will be attending the opening ceremony of the Winter Olympics in Russia on Feb. 7 as a guest of Russian President Vladimir Putin.