Jesus and the Apostles under a mosque’s dome 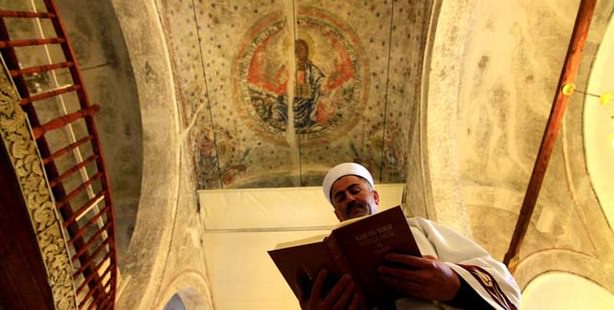 Located in Gümüşhacıköy in the Black Sea Province of Amasya, there stands a church constructed for Greeks of Turkish nationality, who worked in the silver mines in the 1800s. The church is now used as a mosque, but the uncovered figures of Jesus and the Apostles under the dome are preserved. When prayer time arrives the figures are simply covered with a curtain.

In the 1800s a large number of Turkish Greeks lived in the town of Gümüşhacıköy and worked in the silver mines. The Greek community constructed a church, but after 1924, the church became known as Maden Mosque. Yet, the mosque preserves the images of Jesus and his Apostles found in the dome.

Maden Mosque in the Eski Cami neighborhood catches the attention of visitors and residents alike with the Christian symbols found in its dome.

The mosque's imam, Mahmut Bayraktutar, explained to an Anadolu Agency reporter that the church was built in the 1800's at the request of the Orthodox Christian Greeks working and living in the town.
Bayraktutar revealed that around the time of the Lausanne Agreement of 1924, the Greeks who were leaving the area were replaced by Turks immigrating to the area from Western Thrace. At that time, the church began to be used as a mosque. In 1928 a mihrab (a niche in the wall of a mosque or a room in the mosque indicating the direction of prayer) was added to the place of worship and the mosque experienced significant damages in the earthquakes of 1939, 1941 and 1943.

The last major earthquake affecting the area was in 1996. The mosque once again was in need of repairs. Bayraktutar recounted how during the repairs on the mosque, the images of Jesus and the Apostles were discovered. He explained, "In the restorations carried out in 2007 and 2008 by the Tokat Charieties Regional Directorship the figures were authenticated. Our place of worship is a rich house of God with Christian figures in the wood beams and representations of Jesus and the Apostles under the main dome."

Imam Bayraktutar detailed the system whereby an electronic curtain automatically covers the figures during prayer times and the slides back to reveal the art during visitors' hours.

Eski Cami neighborhood chief Mustafa Sarıkap elaborated on the story of Turkish Greeks. The community emigrated from Kayseri to extract silver from the local mines. The church was then built at their behest.

Sarıkap also told of Greeks bringing bathtubs to the neighborhood. He explained, "The Greeks that came here built a church and bathtubs. It's known that the Greeks worked in the silver mines here for 300 years."

Şerif İşnaz is a part of the mosque's community. He stated, "It doesn't bother us that the mosque was previously a church. We have been using it as a place of worship since 1924."