Turkey, always an ally of Yemen 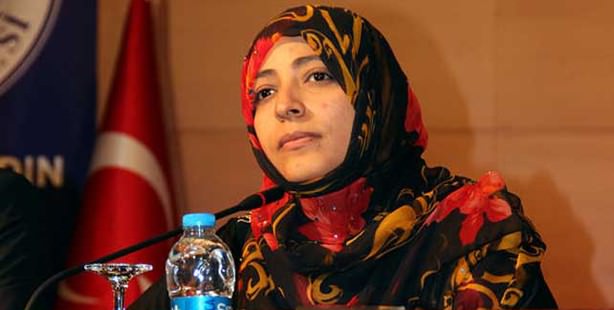 Strengthening bilateral ties between Turkey and Yemen after the Arab Spring was the headline of Nobel Peace Prize-winner journalist Tawakkol Karman’s speech at Istanbul Aydın University.

Talking about her time during the Yemen Spring, a vocal opponent of the Yemeni president and a member of the main opposition party Al-Islah, Tawakkol Karman explained that what started as massive protests against the proposed constitutional change, economic condition and corruption evolved into a call for the resignation of Yemeni president. According to Karman, the revolution in Yemen emerged from the lack of freedom, justice, human rights and people's honor in the country. She emphasized that the Yemen revolution was a peaceful one and added, "Everyone in Turkey, young and old shared our dream. They all shared our call for freedom, justice and peace in Yemen, Tunisia, Egypt, Libya and Syria. All countries participating in the Arab Spring aspired to bring peace to their countries."

She further noted that the bilateral ties between Turkey and Yemen grew stronger following the Arab Spring. Being such a strong country, Turkey supported the change in Yemen and sided with the people of Yemen and a brighter future. Karman, who wishes victory for Egypt and Syria in their fight against injustice like Tunisia and Yemen said, "The massacre in Syria is unfortunately the sad side of the revolution."

Acknowledging the good ties between Yemen and Turkey, Assistant Professor İsmail Gündoğdu mentioned the common history between the two countries dating back to the Ottoman era. Gündoğdu, who was also in Yemen during the revolutions, said "I would have never thought that the protests would turn into such a big revolution and succeed in overthrowing the suppressive regime and its ruling dictator… Just like Tawakkol Karman said, the protestors were never violent. I never once saw the use of a gun or any other weapon."