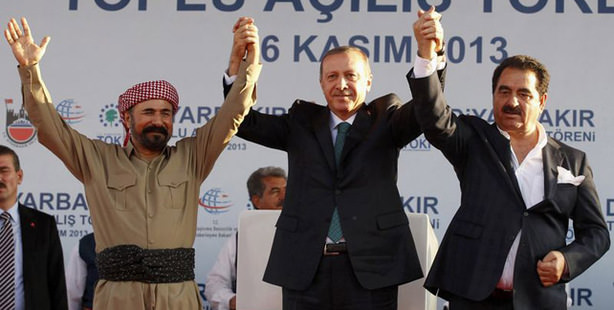 An in-depth analysis of the peace process clearly indicates that Turkey is inching towards achieving sustained peace. The political reforms, initiatives and improvements continue to produce tangible results, aiming to put a permanent stop to violence.

Turkey's current stance towards responding to the Kurdish problem continues to produce positive results despite efforts to halt the peace process. Osman Nuri Gülaçar, AK Party's mayor candidate for Van, an eastern province of Turkey, recently attended a meeting and made important remarks on the atmosphere of peace currently present in the region: "The resolution process has brought peace to the region at last. We must be aware of the peace atmosphere, the brotherhood and the blessings surrounding it… We have always been brothers and sisters, but the course of events did not quite allow us to live in peace until recently".

For over three decades, Turkey experienced continued terrorist attacks by the militant organization Kurdish Workers' Party (PKK). Some 40,000 lives were lost, while thousands were wounded and permanently disabled. To further illustrate the severity of the issue, it is reported that over 300 billion dollars has been exhausted to fight terrorism since 1984. While this amount could very well have been used to revive the economy and develop the country, consistent terrorist attacks deprived Turkey of such an opportunity. It was only when the government acknowledged that terrorism cannot be concluded through military means alone. Accordingly, this was the approach adopted by the AK Party, whose main objective is to address the economic, social, cultural and political dimensions of the issue. Upon recognition of the lack of democratic and economic grounds to resolve the problem, the Turkish government kick-started a process of peace building measures in 2005. As a result, in 2009, the government announced the "Kurdish initiative", which also came to be known as the "democratic initiative" or the "resolution process". This initiative followed a strategy that revolves around democratization and the disarmament of the PKK.

Despite facing a number of provocations, the society stood against it and showed that the only way to resolve this issue is by strong and determined policies through government approach. PKK's imprisoned founding member, Abdullah Öcalan too reached the same conclusion when he realized that the government is no longer under the tutelage of top civil-military bureaucrats and the National Security Council, but is led by a competent political leader. This in turn led him to acknowledge the fact the Kurdish issue in Turkey can only be resolved through a robust political agent. For instance, upon Öcalan's call on March 13, the PKK returned eight kidnapped soldiers and civil servants. Furthermore, on March 21, Öcalan's letter to the Kurdish people was announced during Nevruz celebrations. Here too he emphasized the idea of "laying down arms and settling matters through ideas and politics": "I would like to express that a new era has begun, an era where politics comes to the forefront instead of arms. We have reached a stage where it is time for our armed militants to withdraw." His expressions were embraced by Murat Karayılan, a leader of the PKK. Following these calls, the PKK announced a ceasefire on March 21. In addition to this, they also announced that they will begin to withdraw from the Turkish border, which would be the first stage of the peace process. The second stage would be the implementation of democratic reforms by the government, and the final stage would be the rehabilitation of PKK militants. While there are 2,000 PKK militants at Turkish borders, approximately 1,200 of these were deactivated in 2012, with the average lifespan of terrorists dropping to two years. Likewise, there was a significant decrease in the amount of terrorist activities, which meant serious internal and external pressure to force the PKK to accept the peace process.

With the continued implementation of the stages of the peace process, it is possible to see positive results. The democratization package announced by Prime Minister Erdoğan on Sept. 30 is one of the clearest examples demonstrating this. According to Erdoğan, there was a serious positive shift in the resolution of this issue whereby the discourse of authoritarian and chauvinistic tendencies were disposed and replaced by a democratic system: "Turkey is no longer a state that imposes a single identity, describes the ideal citizen or occupies itself with the ethnicity, religion or worldview of its citizens." Within this context, the democratization package includes a wide range of measures to address the shortcomings of the current system. For instance, the electoral system is planned to be reformed in a way that will allow more political parties to participate and run for elections. Moreover, political propaganda in different languages in addition to Turkish will be permitted. This is groundbreaking considering that almost a decade ago, Kurdish was strictly forbidden in Turkey, even on TV programs. Furthermore, supplementary to the reforms made in 2003 to permit language teaching schools, with the establishment of additional language and dialect departments at universities, private institutions are now able to offer education in different languages.

Despite persistent opposition to halt the process over the course of 11 years, peace building efforts have proved successful. Currently, the government is actively working with a committee of wise men and non-governmental organizations, while frequent meetings are being held at İmralı Prison where Öcalan is being held. According to the Committee, the process is being conducted without any disturbances and with a very strong will. The June 2013 Gezi Protests have proven that the Kurds stayed away from the provocations of leftist-liberal actors and decided to stick to political strategies rather than resorting to violent means.

On the other hand, the peace atmosphere continues to yield positive economic results. In 2012 alone, over 500 new investment applications were made in eastern Turkey. As violence stopped, more corporations and entities are becoming interested in investing in the region. According to the Minister of Economy, from June 2012 to June 2013, 5,126 domestic Investment Incentive Certificates worth TL 68.5 billion were issued. This created employment opportunities for 187,478 people.

The peace process continues to be implemented despite opposition, as Binali Yıldırım, former Minister of Transportation notes: "They try to criticize the peace process. This process means that young soldiers will no longer be martyred… We will avoid hostile political relations and build a bridge to people's hearts. We will love each other even if we are not of the same opinion. We inherited this country from our forefathers".