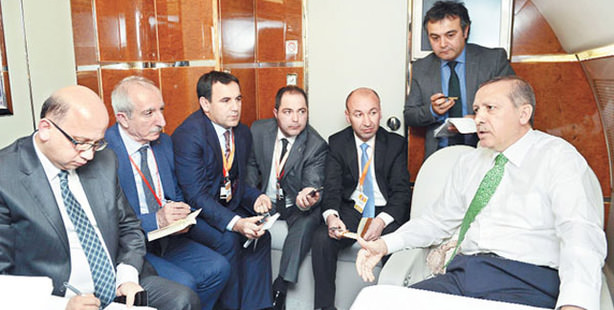 Turkish Prime Minister Recep Tayyip Erdoğan told reporters that conspirators in the police carried out an eavesdropping operation on himself, the President and other high-ranking officials. He said the government considered new regulations in operations by law enforcement, such as having the High Criminal court vote on the issuing of warrants for random wiretapping.

The AK Party government has said it was targeted in a defamation campaign with the December 17 operation under the guise of a graft probe. The government blames the Gülen Movement of Fethullah Gülen, an influential Turkish cleric residing in the United States, for a "judicial" coup attempt. Following the operation to discredit the government, hundreds of prosecutors and police chiefs with links to the Gülen Movement were removed from their posts. They were involved in raids and surveillance operations not authorized by their superiors. Most suspects detained in those raids were released later.

Speaking to reporters as he was returning to Turkey from Iran, Erdoğan said his government, through legal regulations, will take new measures against unauthorized raids and eavesdropping operations. "I am informed that they wiretapped my phone conversations, conversations of the President and Parliamentary Speaker and many others," he said. Erdoğan stated that random wiretapping by law enforcement will be lifted and warrants for wiretapping operations will have to be decided by unanimous vote of judges at High Criminal Court. He added judges will thoroughly examine the investigation before issuing a warrant for wiretapping and there will be a time limit in surveillance operations.

Governors to have final authority

Erdoğan said superior authority in law enforcement operations will be assigned to governors and provincial police chiefs will have secondary authority. "Prosecutors will not be able to randomly order police to carry out raids. The governor will have a say on it," he said. Referring to a recent raid upon the order of a prosecutor to a truck belonging to Turkish National Intelligence Directorate (MİT), Erdoğan said it was "the work of a parallel structure," a name he attributes to the Gülen Movement's infiltrators within the state. Turkish security forces stopped and attempted to search a truck allegedly carrying arms to the Syrian rebels in southern Turkey upon the order of a prosecutor. The government intervened and the truck resumed its trip. Media reports claimed MİT was illegally delivering weapons to extremists in Syria. The government denied the allegations. The prosecutor was suspended after the incident.

Prime Minister said that those "afraid of coming forward" now inform the Prime Ministry about the wiretapping. "People suffered so much at the hands of them," Erdoğan said, referring to conspirators who wiretapped phones.

Erdoğan mentioned a new package of bills will include the abolition of Specially Authorized Courts. Prosecutors at those courts, which were allegedly infiltrated by the Gülen Movement's followers, were often accused of forging evidence and committing other types of fraud to convict people opposing the Gülen Movement. Erdoğan said Anti-Terror Law will also be amended by the inclusion of its articles to Penal Code and it would be abolished eventually. The law, shortened as TMK, was criticized for its strict punishment of even minor offenses such as mentioning a terrorist leader's name respectfully.

The prime minister also spoke on foreign policy issues. On Syria, Erdoğan elaborated on his discussions with Iranian officials. Erdoğan said Iran saw Assad's resignation meaningless without elimination of terrorism in Syria. "I told them terrorism came to Syria with Assad. I told them that people need a regime change in Syria, urgently," Erdoğan said. He implied that a transitional government would help resolving the conflict in that country.

Prime Minister will soon travel to Germany for talks with Chancellor Angela Merkel. He will seek Germany's support for Turkey's European Union accession bid. "We expect from Germany what we expected from Hollande," he said, referring to the French president who recently visited Turkey and assured support for Turkey's bid.