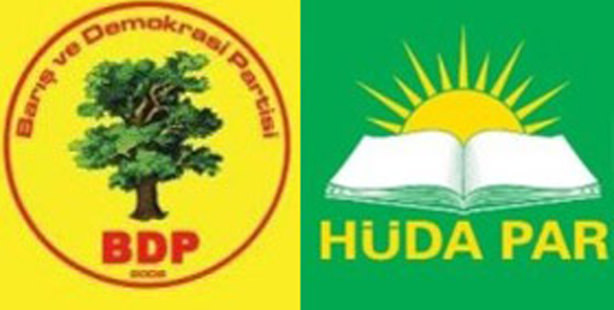 Sixteen injured in clashes between Hüdapar and BDP in the Southeastern province of Diyarbakır.

The verbal assault occurred between members of the Free Cause Party (Hüdapar), an Islamist party affiliated to Turkish Hizbullah, and the Peace and Democracy Party (BDP), a Kurdish political party, in the Lice district. When Hüdapar members wanted to distribute leaflets to promote their local candidate, the scene soon turned into violent clashes in front of the BDP's building.

Hüdapar's Deputy Chairman Hüseyin Yılmaz and Diyarbakır mayoral candidate, Hüseyin Yılmaz, accused the Kurdish Workers' Party's (PKK) youth organization, the Patriotic Revolutionary Youth Movement (YDG-H) of attacking Hürpar's convoy. Hürpar pressed charges after their vehicles and the passengers inside the vehicles were injured by the stones thrown at them.

The clash between groups was broken off by Diyarbakır police forces and the injured people were taken to the Lice State Hospital. Hüdapar members were taken out of the district under police control. Diyarbakır's Deputy Governor Zafer Engin confirmed that 16 people were injured while a car was set on fire.

In the meantime, Nursel Doğan, BDP's Diyarbakır Deputy, visited one person injured in the incident at Dicle University Hospital and noted that one shopkeeper, struck by a stone during the fight, became heavily injured. He denied allegations that the incident started because of the BDP members' provocation.