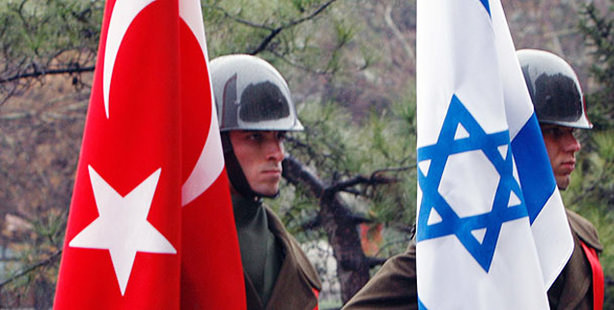 According to a diplomatic source at the Ministry of Foreign Affairs, Turkey and Israel are continuing talks regarding the payment of reparations to the victims of the Mavi Marmara flotilla attack in May 2010. The attack resulted in nine casualties and caused severe diplomatic strains between once-close allies.

The draft agreement between the two countries entails significant compensation for victims' families, a restoration of full diplomatic ties between the parties and a guarantee by the Turkish government to not prosecute the Israelis involved in the flotilla attack, the same source added. The diplomatic crisis dates back to a May 2010 incident, when an Israeli special operation team went aboard the Mavi Marmara, a civilian vessel carrying humanitarian aid to Gaza, in international waters. The Israeli raid of the flotilla resulted in the death of nine civilians, an American and eight Turkish citizens. Following the attack, the Israeli government faced international condemnation while bilateral relations declined to a historic low.

Observers claim, however, that the early signs of a diplomatic crisis between Turkey and Israel had emerged even before the flotilla controversy and can be traced back to Israel's blockade of Gaza in December 2008 which, in retrospect, represented a turning point in bilateral relations. Following the Israeli blockade, relations worsened in January 2009. Turkish Prime Minister Recep Tayyip Erdogan famously walked off the stage after a heated exchange with Israeli President Shimon Peres during a panel discussion on the situation in Gaza at the Davos Summit. Another sign of crisis was a January 2010 incident when Danny Ayalon, Israel's deputy foreign minister, publicly humiliated Ambassador Oğuz Çelikkol, Turkey's chief diplomatic representative in Jerusalem at the time, during a press conference at the Knesset.

Severe tensions between Turkey and Israel resulted in the former country's September 2011 decision to withdraw its ambassador as Erdoğan described the flotilla raid as "state terrorism." Ankara's initial effort to downgrade diplomatic relations also resulted in a unilateral suspension of military cooperation between the countries. Turkish government officials demanded an official apology for the Mavi Marmara incident and compensation for victims' families as well as an easing of the Israeli blockade of Gaza.

The Israeli government took the first step toward reconciliation on March 24, 2013, when Prime Minister Benjamin Netanyahu apologized for their mishandling of the 2010 raid on the Mavi Marmara during a conference call with Prime Minister Erdoğan and President Barack Obama. In September 2013, Turkish Foreign Minister Ahmet Davutoğlu remarked that there had been "some progress" in improving bilateral relations while noting that Israel's efforts remained inadequate for a restoration of diplomatic ties. Reconciliation talks resumed throughout the year while the Turkish government offered public support for a potential agreement. During a press conference on Jan. 4, Deputy Prime Minister Bülent Arınç commented that Turkey and Israel "need to reach an agreement on compensation talks for the sake of bilateral relations."

A daily Haaretz news report claims Netanyahu instructed the Israeli delegation conducting talks with the Turkish side to raise their compensation offer to $20 million and add another $3 million to that figure if the other party refuses.

Western diplomats who spoke to Haaretz on the condition of anonymity said progress has been made in talks with Turkey to resolve the issue. Also a senior government official, who commented on the current status of negotiations on the condition of anonymity, confirmed that Turkey and Israel have reached an agreement with the details to be announced to the public in coming days. The talks are expected to restore full diplomatic relations and mutual appointment of ambassadors.

Arınç who also commented on the news about reconciliation talks between Turkey and Israel said, ''I too feel that a solution is near.'' He added that an International agreement will be signed as soon as they reach an agreement and stressed the importance of lifting the Gaza blockade: ''Israel allowed to pass drugs and some goods, but the blockade is still in place. Therefore, we are not ready to sign it yet," he said.

Over the last few years, economic cooperation between Turkey and Israel has improved significantly despite diplomatic tensions between the two governments. In 2013, Turkey's total exports to Israel reached $2.6 billion while both countries recorded a total trade volume in excess of $5 billion. Ankara's recent decision to ease security measures toward Israeli airliners will resume direct flights between Turkey and Israel after years of turmoil. According to an agreement signed by Turkish and Israeli Civil Aviation Authorities in December, Israel will renew regular flights to Turkey following a hiatus of more than five years.

Meanwhile, Turkish energy companies Zorlu Energy and Turcas Energy are reported to continue negotiations with various Israeli companies over plans to construct a gas pipeline to transport Israeli natural gas to Turkey. Turcas Energy's planned 470 kilometer long pipeline costing $2.5 billion will run from Israel to Turkey's southern province of Mersin. Its annual capacity is planned to be 16 billion cubic meters. Zorlu Energy has also been holding talks with Israel to establish a pipeline and to purchase natural gas.

Furthermore, business circles are confident that a restoration of diplomatic relations is likely to ease political tensions and promote further economic cooperation.