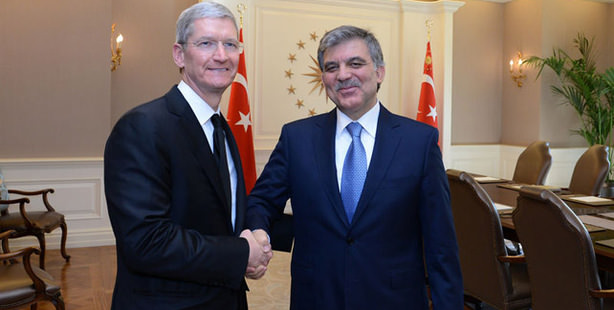 Apple CEO Tim Cook was in Turkey for the opening of the company's first retail store in the country and took the opportunity to meet with Turkish President Abdullah Gül yesterday at the presidential residence in Ankara.

Cook said Apple was quite interested in Turkey's FATIH Project, which aims to substitute traditional teaching equipment in the classroom with advanced teaching methods like Apple iPads. In February 2013, Apple executives came to Turkey to discuss a deal to sell nearly 15 million iPads to Turkey for educational purposes; a deal valued at $4.5 billion.

The first Apple online store opened in Turkey in November 2013. Now the first retail Apple store will open its doors in the country with a 21,500 square meter retail space located in Istanbul's Zorlu Center. Cook stated that the first Apple store in Turkey will be quite unique in that it will have a very different concept to other Apple stores around the world.

When Gül kindly requested that Apple produce a Turkish version of 'Siri' and other mobile applications, Cook responded, "We receive many tweets from Turkish Apple users about that issue and we will work on it."

Towards the end of the meeting, Cook noted that the company's main aim is to make people's lives easier and to have digital content be accessible to all people. Prior to his visit to Turkey, Cook was in Ireland and the United Arab Emirates as a part of an international tour.