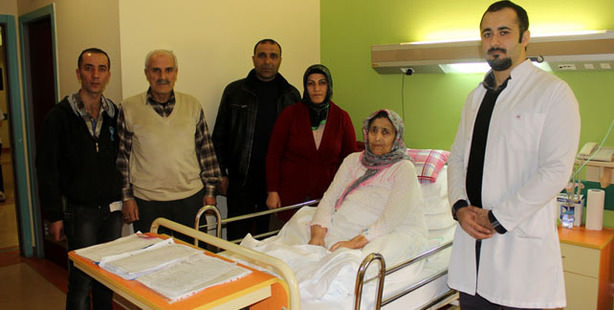 A 60-year-old woman in Turkey had a 57 kilogram tumor removed from her stomach, the size of which amazed her doctors.

Belgiye Denli, resident of a village in Turkey's Black Sea region, sought treatment for excessive weight gain in only three months. Doctors found a large tumor growing inside woman's stomach. After tumor was removed by surgeons at a hospital in the city of Kocaeli, woman's weight fell to 83 kilos.

Professor İzzet Yücesoy, who led the team of surgeons that operated on Denli, said the patient suspected her sudden weight gain when her stomach unusually swelled in a period of three months.

"She was unable to walk and was not able to lie down due to the mass in her stomach," said Yücesoy. "We couldn't perform tomography and MRI on her because she could not fit into the tomography device. Through an ultrasound, we found what we called a solid mass growing out of her uterus towards the stomach.
He said the largest benign tumor in the world was 60 kilograms, but a malignant tumor as big as 57 kilos was "never before seen in the world."

Denli said she first thought her weight gain was normal. "But as it grew, I could barely walk," she said. "It gave me a great pain."

Dr. Taylan Şenol who operated on the patient, said the exact cause of tumor was unknown and would be further investigated .