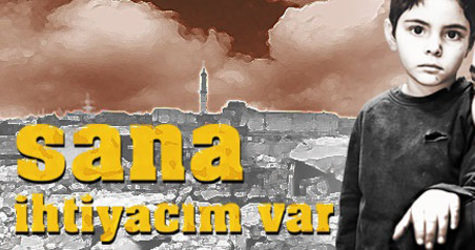 The local campaign that began last month was launched internationally at an event in Istanbul on Tuesday. Through a videoconference at the event, representatives of NGOs from Malaysia, Indonesia, Pakistan, Lebanon, the U.S., France, Belgium, Libya, South Africa and Yemen pledged aid to Syrians affected by the ongoing conflict in the country. Donotions can be made through the campaign's website or via their bank account.

The campaign was launched by the Turkish Disaster and Emergency Management Presidency (AFAD) in cooperation with the Union of NGOs of the Islamic World (UNIW), an umbrella organization of NGOs from Muslim countries.

UNIW Secretary-General Ali Kurt said humanitarian needs range from food and accommodation to clothes and medicine. In a passionate statement, Kurt stated: "Children are starving and dying of cold. Elderly people die due to lack of care. People die of their wounds in the bombings. Humanity dies before the eyes of people insensitive to this ordeal. People lost everything they have in bombings. The international community, unfortunately, only watches the situation. The Geneva II talks were not fruitful; international bodies like the United Nations, OSCE [Organization for Securiıty and Cooperation in Europe] and OIC [Organization of Islamic Cooperation] only issued statements. Let alone stopping the war, no one pushes enough for humanitarian aid."

According to the UNIW, about 10 million people in Syria are in dire need of humanitarian aid. Turkey, which has a lengthy border with neighboring Syria, hosts over 210,000 Syrian refugees in camps in several border towns. Turkey has spent over $2 billion dollars on hosting Syrian refugees in the country. Turkish Prime Minister Recep Tayyip Erdoğan criticized the international community for failing Syrians in need and only contributing $130 million in aid. Turkish NGOs also frequently send trucks loaded with humanitarian supplies to Syria, yet the Assad regime refuses to open a humanitarian corridor to facilitate the movement of aid, on the grounds that the supplies may end up in the hands of rebels it brands as terrorists. Thus far, humanitarian aid has only reached rebel-controlled areas.