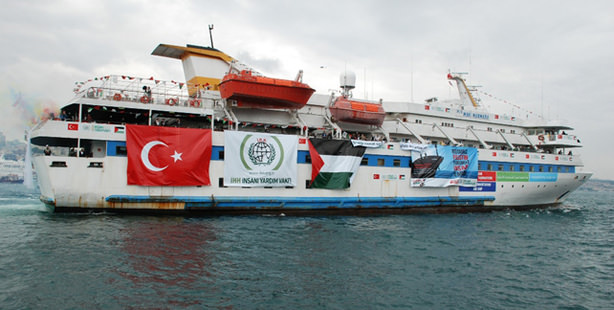 Fetullah Gülen’s controversial statements about the Mavi Marmara incident in his recent BBC interview continue to increase tensions and draw more criticism from all spheres.

Despite a number of Turkish and international news outlets having previously tried to interview him, reclusive Islamic preacher Fetullah Gülen gave his first televised interview in almost 16 years to BBC late last month.

Gülen and his movement publically proclaim their political neutrality, but he did offer some seemingly politicized remarks about highly sensitive issues such as the 2010 Israeli raid on the Mavi Marmara flotilla. At the time the ship was trying to break the illegal blockade imposed on Gaza by Israel and was part of a larger flotilla organized by the Turkish charity Humanitarian Aid Foundation (IHH). Before it could reach the Gaza coast the boat was forcefully boarded by Israeli forces and nine activists were killed. During his interview on BBC Gülen directly placed the blame for the activists' death on the IHH by saying that the organization failed to utilize diplomatic tools and resorted to the use of violence which resulted in unnecessary bloodshed.

Gülen's most recent interview is not the first time he has been criticized on the subject of the Mavi Marmara. In his 2010 Wall Street Journal interview, Gülen commented on the incident, saying, "It is not easy to say if they [the IHH] are politicized or not". He continued by insisting that the IHH should have sought permission from Israel before transporting aid to Gaza, and that only the U.N would be authorized to decide who is to blame for the incident.
During his interview with Cüneyt Özdemir in 2010, Gülen refused to refer to the victims of the Mavi Marmara as 'martyrs': "It is out of the question to call these people martyrs. They knew they were going there to get killed and went at their own discretion".

IHH's President: IHH's innocence is recognized by the international community

In his interview with Sabah, Bülent Yıldırım, the current head of IHH, criticized Gülen's remarks and noted: "Gülen's statements about our civilian organization were more damaging than claims of the opponents. A majority of the American public agrees that what Israel did in the flotilla incident was wrong and unjustified. By his remarks, Gülen proved that he is with the oppressor. The families of the martyrs are deeply upset about his statements. They expected him to side with the oppressed and at least recognize Israel's fault".

Alain Gabon, a professor at Virginian Wesleyan College, noted that Gülen's remarks were part of an effort to appear neutral. Gabon described this as a "shocking" and "outrageous" attempt to justify Israel's killing of defenseless Turkish civilians, adding that Gülen unjustly "puts the blame on Turkish victims of Israel's lethal assault in international waters". Moreover, he observes that Gülen does not comment on the way Israeli forces failed to handle the incident peacefully even though the activists were unarmed and were trying to break a "barbaric" blockade and notes that Gülen's "conspicuous silence about Israel's violence and oppression of Palestinians is deafening and something that begs an explanation". Moreover, he notes that there could be two hypotheses to explain Gülen's hypocrisy. The first is that contrary to the official rhetoric, the U.S. favors obedient and pliable regimes regardless if they are democratic or not, therefore there is an emerging tactical alliance between Gülen and his powerful U.S. sponsors to try to undermine Erdoğan and drive a wedge between him and his cadre and the electorate. The second hypothesis is that Gulen might have become, what Dr. Gabon calls the guy Western powers would use in their geopolitical chess games with, or against, regimes they don't like or with which they are growing uncomfortable with.