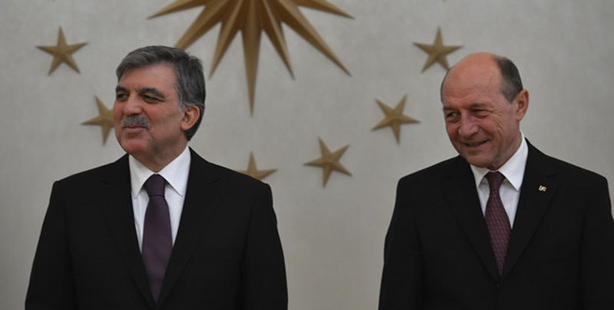 Romanian President Traian Basescu has arrived in Ankara for a two-day official visit as a guest of Turkish President Abdullah Gül. The presidents held a joint press conference following a tête-à-tête and inter delegation meetings at the Çankaya Presidential Palace.

Basescu expressed his appreciation to be in Turkey and said the main objective of his visit was to strengthen the bilateral dialogue between Turkey and Romania.

Political and economic ties are utmost importance, and their development is equally significant for both countries, said Basescu.

Turkish president Gül said Turkey and Romania had excellent economic and commercial relations and thanked the Romanian government and people for their continuous support on Turkey's EU bid.

Highlighting the strengthened economic relations, Gül stated that an investment summit would be held in cooperation with the Union of Chambers and Commodity Exchanges of Turkey (TOBB).

Gül also said the volume of trade between Romania and Turkey is around six billion dollars, and he expressed hope to see it reach $10 billion.

Basescu added that Turkey would double that investment with business opportunities in Romania boosted with EU funds particularly on construction in the new fiscal period.

Seeing Turkey as one of the key actors in the region regarding the economy, Basescu suggested Turkish companies give priority to the food industry. He also called for Turkish investors to join tenders in Romania, including ecological agriculture, green energy, auto parts, construction, the petrochemical industry, tourism and IT industries.

Basescu also noted that Turkish and Romanian corporations in Central Asia have the potential to invest in countries such as Azerbaijan, Kazakhstan, Turkmenistan and Armenia.

In response to the journalists' question on Turkey's EU bid, Basescu said Romania give its full support for opening all the EU chapters and negotiation should be finalized.

He cited that Romania and Turkey are located on the southeastern flank of NATO, and they are both responsible for developing missile defense systems to protect Europe.

Romanian president stated that Turkey's EU membership would be very much welcomed and appreciated to revitalize the Black Sea region's synergy and build increased levels of trust and confidence.

Basescu said the crimes, including terrorism, drug and human trafficking strengthened the bilateral relations between the countries. He also added that the countries would keep consolidating their cooperation in fighting these threats to maintain the security.

Romanian president said the presidents also discussed the cooperation potential for the technical staff training and for the maintenance of F16 aircrafts to be commissioned to the Romanian Air Force.