Attack on opposition party raises concern ahead of elections 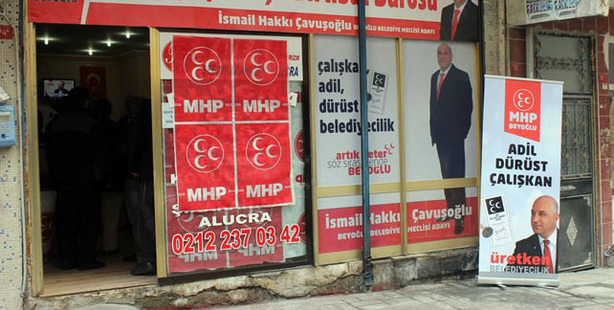 Assailants opened fire and hurled firebombs on a campaign office of Turkey’s opposition Nationalist Movement Party (MHP) in Istanbul on Thursday. The attack came two weeks after another attack on a MHP office that killed a party official. MHP officials claimed the attacks are aimed to increase tensions with the Kurdish community ahead of local elections in March.

Suspects first threw firebombs at the campaign office of MHP's mayoral candidate in Beyoğlu, a central district of Istanbul around midnight, then opened fire. The office was closed at the time of attack, which caused material damage. Turkish police launched an investigation into the attack.
Osman Gür, MHP's mayoral candidate for Beyoğlu, said the attacks against campaign offices "targeted the MHP for some reason." Vowing to press ahead with preparations for the elections, Gür said, "We believe they may continue such provocative attacks but we, nationalists, will not bow down and will continue our struggle on a democratic ground."

On January 26, a group of assailants attacked a MHP campaign office in Istanbul's Esenyurt district. Cengiz Akyıldız, an adviser to MHP's mayoral candidate, was killed and five others injured in that attack. Three suspects charged with conducting the attack were arrested. A group of alleged MHP supporters staged riots outside the courthouse where suspects were brought.

In statements following the Esenyurt attack, Devlet Bahçeli, chairman of MHP, said he suspected the supporters of the ruling AK Party or PKK, a terrorist organization which has carried out attacks targeting security forces and civilians since the early eighties claiming to fight for Kurdish self-rule, were behind the attacks. The group's main hideouts are in the mountainous regions of eastern Turkey and northern Iraq.
Bahçeli claimed the perpetrators of the Esenyurt attack sought to incite MHP supporters "to take to the streets."

"We will stick to the rules of democracy and will not go beyond the rules of law," Bahçeli said. He continuedş saying "separatists" –referencing PKK supporters-- "continue their provocation in the cities after the mountains." PKK, since early eighties, carried out attacks targeting security forces and civilians, claiming it is fighting for Kurdish self-rule in the southeastern Turkey.

The MHP is a staunch opponent of the Solution Process, a government initiative to resolve the Kurdish question in Turkey that includes restoring the rights of country's long-neglected Kurdish community. The Solution Process began after the PKK's announced its "withdrawal" from Turkey. The MHP claims the government initiative will empower the PKK and eventually lead to autonomy for Kurds in Turkey. Initial media reports on the Esenyurt attack claimed perpetrators were members of Peace and Democracy Party (BDP), which is known for its ties with PKK. The BDP denounced the attack and denied involvement. Like the MHP, BDP officials said the incident sought to incite tensions.

A tense atmosphere engulfs Turkey ahead of March 30 municipal elections. The ruling AK Party was target of an anti-graft probe in December 2013. Prime Minister Recep Tayyip Erdoğan said the probe, which involved sons of ministers in his cabinet and an AK Party mayor, sought to discredit the government to prevent an AK Party victory in elections. The office of Mustafa Sarıgül, the mayoral candidate for Istanbul for main opposition Republican People's Party (CHP), was also attacked twice in the past months.