Disaster management protocol signed between Turkey and the UN 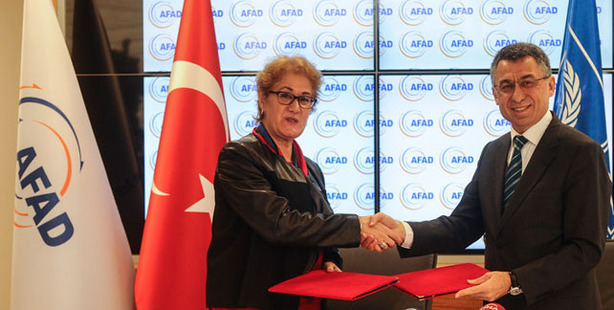 The Turkish government and the United Nations Development Program (UNDP) will cooperate to improve Turkey’s capacity in disaster recovery and emergency relief.

A protocol was signed between Turkey's Disaster and Emergency Relief Agency (AFAD) and the UNDP to collaborate on disaster risk reduction and emergency relief operations. Turkey suffered from various disasters in the past 60 years. Almost 35,000 lives were lost due to earthquakes alone, with economic loss amounting to three percent of Turkey's general national product (GNP) the last 60 years.

Disaster recovery and reducing disaster risk are major factors in Turkey's development. The protocol prepared jointly by UNDP and AFAD aims to increase exchange of information, experience and knowledge on disaster management, including the use of state-of-the-art technology. The cooperation between the two agencies will mostly focus on disaster management, disaster risk reduction, early warning and early recovery systems. Further, the response to the Syria crisis is another matter covered by the protocol.

The U.N. also has a 2005-2015 framework action plan for risk mitigation in disaster management. AFAD's 2013-2017 strategic plan aims to "building a disaster resilient society." The Partnership Framework Agreement against signed between the UNDP and Turkey on March, 2011 also covers disaster risk reduction.

Fuat Oktay, the Director General of AFAD, who oversees acceptance procedures of Syrian refugees responded to journalists' questions on the Syrian crisis during the signing ceremony of the cooperation protocol. Oktay noted the number of refugees in camps reached 218,000 and increased drastically over last few weeks. The Öncüpınar, Elbeyli and Çobanbey regions of Kilis and Gaziantep's Karkamış are highly concentrated entry points for Syrian refugees.

The atrocity of bombings in Syria increased recently with the use of barrel bombs as clashes and border violations of the Syrian military alarmed Turkish Armed Forces. Turkey still maintains an open door policy to Syrian refugees, although the pressure is increasing with 700,000 registered refugees more unregistered.

On the registration process and passports of Syrians fleeing from the battle, Oktay said although entry process is quicker for those with a passport, they are trying to welcome everyone and not necessarily require a passport. Oktay also mentioned the increase, especially from Turkmens in Syria. "We really hope for the conflict to be resolved soon and everyone to return to their country safe and sound. The solution we are offering is temporary; the definite solution can only be a political one. But unfortunately, Geneva II has not served its purpose," said Oktay.