Israel agrees to up reparation for Mavi Marmara victims 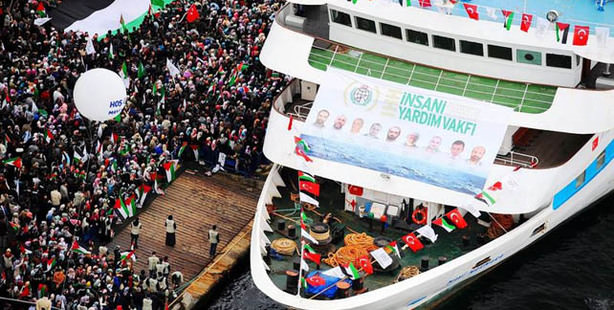 Turkey and Israel are close to a deal that would allocate $25 million in compensation to be paid to the relatives of those killed in the 2010 Mavi Marmara attack and gradually improve bilateral relations, according to sources from the Prime Ministry.

Mavi Marmara boat sailing to Gaza to deliver humanitarian supplies was attacked by Israeli IDF forces on May 31, 2010, resulting in the deaths of 9 Turkish citizens. Following the deadly attack, the furious Turkish government demanded Israel to apologize, pay compensation to the victims and lift the blockade of Gaza Strip.

Mavi Marmara victims filed complaints and took the matter to international courts for the prosecution of against those involved in the attack.

According to sources from the Prime Ministry, who did not want to divulge their names, Turkish and Israeli governments have agreed on a compensation deal worth $25 million and the agreement has been submitted to Prime Minister Recep Tayyip Erdoğan for his approval.

Last week Israeli daily Haaretz claimed the two sides had agreed on a $20–million deal. While Haaretz claimed the deal was done, the Turkish side said there was some progress in the negotiations but a final deal was far from certain. According to sources, the Israeli side accepted to increase the compensation to $25 million after objections from the Turkish delegation at the last meeting.

After the prime minister's approval, the agreement will be discussed at the cabinet before being submitted for parliamentary approval.

After being approved by Parliament, a fund will be established for the Israeli government to deposit the compensation. Those who lost their lovedones and those who were injured during the raid will be able to collect compensation directly from the fund.

According to sources, the agreement will not include a clear apology from the Israeli side. During U.S. President Barack Obama's visit to Israel, Israeli Prime Minister Benjamin Netanyahu telephoned Erdoğan and apologized for the deaths that occurred during the raid. The Turkish government will accept Netanyahu's statement as an official apology, which was registered in written form by both countries' foreign ministries.

The compensation agreement will refer to the official apology made by Netanyahu.

The Israeli side also requested the dropping of all criminal charges made in Turkey against Israeli officers and soldiers involved in the attack. According to sources, the Israeli side said, "We accept the apology, compensation and the lifting of the embargo. However, we don't want to get involved with any other trials or penalties."

While the Turkish side noted that it could not guarantee the dropping of charges by independent courts, the agreement that will be approved by both the cabinet and Parliament would include an article that would declare that the deal will be binding for courts.

According to sources from both the Prime Ministry and the Foreign Ministry, Israel is trying to rush the deal because it wants to formulate a new regional initiative, in light of improving ties between the U.S. and Iran.
Israel will base its new regional initiative on energy cooperation, with the final aim being the delivery of the natural gas it's extracting in Eastern Mediterranean to Europe via Turkey. Previous Israeli plans to export its natural gas via Cyprus and Greece have been shelved due to their exorbitant cost.

As soon as the ties are normalized, both countries will resend their ambassadors and sign bilateral commercial deals.

However, Prime Ministry sources believe, it will take much more than a compensation deal to normalize the ties, noting that of the three conditions set by Turkey, the lifting of the embargo on the Gaza Strip remained in place. While Turkey accepts the fact that the easing of the embargo is a gesture of goodwill, it argues that in the face of upheaval in Egypt, Gaza's economic state remains dire and the total lifting is a necessity.