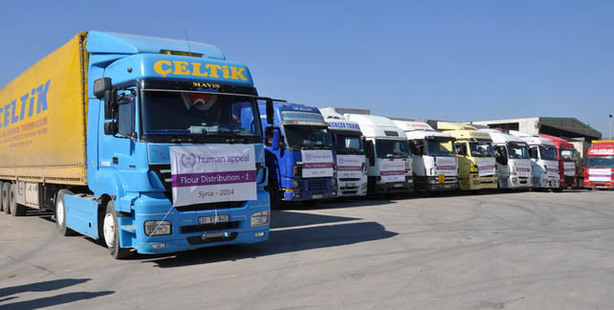 The convoy of 21 trucks of flour and 5 trucks of other foodstuff left the Öncüpınar border crossing in southern Turkey's Kilis on Saturday. Erhan Yemelek, IHH's local representative in Kilis, said the aid included around 500 tons of flour and food.

The aid campaign was organized in coordination with Human Appeal, an Australia-based relief organization.

The aid convoy is part of "Sana İhtiyacım Var" (I Need You), an international campaign for Syria spearheaded by Turkey. The aid trucks entered Syria through Bab Assalameh, a Syrian border crossing controlled by Free Syrian Army rebels fighting the Assad regime. Yemelek said the large amount of flour would help the Syrian economy by lowering bread prices.


The humanitarian aid will be delivered to Syrians in and around the northern city of Aleppo.

Aleppo, a rebel bastion near the Syrian-Turkish border, is among the places hit hardest by the conflict. Daily airstrikes razed the city almost to ground and survivors increasingly flee the city for Turkey.

IHH is among charities and relief organizations from Turkey and Muslim countries which launched "Sana İhtiyacım Var" campaign last week in cooperation with Turkish Disaster and Emergency Management Presidency (AFAD).

Number of people in urgent need of humanitarian aid reached to 10 million according to NGOs.

Turkey hosts over 210,000 Syrian refugees in camps it set up in several border towns and spent over 2 billion dollars for their needs. Ongoing clashes in Syria and Bashar al-Assad regime's refusal to open a humanitarian corridor to facilitate the movement of aid hamper aid efforts.