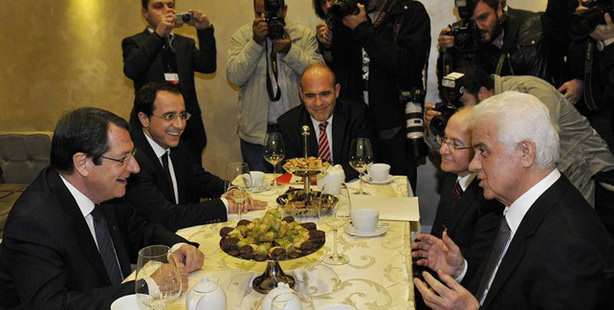 After a 19-month break, peace talks will resume today in Cyprus. Greek Cypriot leader Nicos Anastasiades and Turkish Cypriot leader Derviş Eroglu will meet in the United Nations protected area of Nicosia at 11.30 a.m., the U.N. announced on Saturday.

The talks are scheduled to restart in Oct. 2013. However, both sides of the island could not reach agreement over the wording of a joint statement for months. As a result of the efforts of the U.N. and U.S., Cypriot leaders announced their agreement to draft a joint declaration on Friday.

Relaunch of the talks welcomed by officials, Vice President Joe Biden expressed Washington's "unwavering support" for a Cyprus settlement and said he "looked forward to a successful resumption" of the talks. Similarly Greek Prime Minister Antonis Samaras praised the fresh start and called it "one of the leading priorities of the Greek foreign policy." U.N. Secretary General Ban Ki-moon also welcomed the agreement saying that "the (Cypriot) leaders for the progress made it so far and I would like to take this opportunity to reiterate the full support of the United Nations for their efforts toward a mutually acceptable solution." The EU shared similar sentiments: "A unified and integrated Cyprus would benefit not only Cypriots, but the EU as a whole. The union was ready to extend all kinds of support that would be requested by the parties within the scope of negotiations", the head of the European Commission Jose Manuel Barroso said in a statement.

Turkish Foreign Minister Ahmet Davutoğlu also underlined Turkey's support on the talks saying that the Turkish side had displayed the political will to resolve the long-standing issue of division between Turkish and Greek Cypriots. Davutoğlu also stressed that "This problem cannot last for decades. There needs to be a lasting resolution in Cyprus this time," he said. However, Davutoğlu remarked, "If the Greek side again says no to the talks, this time a referendum would not remain inconclusive," referring to the U.N. Annan Plan in 2004 that was rejected by the Greek Cypriots. The Annan Plan or the Comprehensive Settlement of the Cyprus Problem, proposed to resolve the Cyprus dispute by restructuring the island as the "United Republic of Cyprus," which would be a federation of two states. Meanwhile, Davutoğlu had a phone call with his Greek counterpart, Evangelos Venizelos, to exchange views and express his pleasure over the progress in the Cyprus issue.

Following the U.N. mediated meeting on Tuesday, Turkish and Greek Cypriot leaders are expected to issue a joint declaration on the path towards the reunification of the island. A draft joint statement leaked to the media says any final agreement would be subject to a referendum on each side of the dividing line. According to a draft joint statement, Cyprus will be a federal state with a single sovereignty emanating from the Greek and Turkish Cypriots, a single citizenship and a single international personality. It also excludes any future union of the island or part of it with another state or the secession of either community from the federal state. On the other hand, sources say that various options will be on the table during the negotiations. U.N. special envoy Alexander Downer echoes this saying that "there are no plans, at this stage."

In the past few months, the negotiators of the two sides have been meeting in an effort to resume talks and reach reconciliation. Both sides believe that the joint declaration is only the beginning; moreover the hardest part is yet to follow. Greek Cypriot leader Anastasiades stated that "we have hard work ahead and should make a persistent effort. In the time to come, everyone's patriotic standing will be accounted for, the political leadership, the media and civil society. Everyone has a role to play in this effort." However, Anastasiades will face difficulties convincing everyone on his side, notably from the center-right Democratic Party. Its leader Nicholas Papadopoulos has already denounced the declaration as a bad deal that bodes ill for the course of negotiations and urged Anastasiades not to sign it. The Democratic Party is a partner in Anastasiades' ruling coalition government.

On the contrary the Turkish side appears that have the iron will necessary to reach a solution even in a short period. Turkish Cypriot leader Derviş Eroglu stated they have intention and faith to reach an agreement. ''If the Greek side makes an effort on the negotiating table, we can go to referendum within three to five months'' Eroglu said. Likewise, Turkish Cypriot Foreign Minister Nami Özdil stated that the Turkish side has determination to reach a solution within the shortest time. Özdil says that "Shortest time" means the solution may be reached in a few months.

The island of Cyprus has been divided since 1974 when Turkey exercised its constitutional right as a guarantor by conducting a military operation following a coup by far-right Greek Cypriot extremist group, the National Organization of Cypriot Struggle (EOKA).