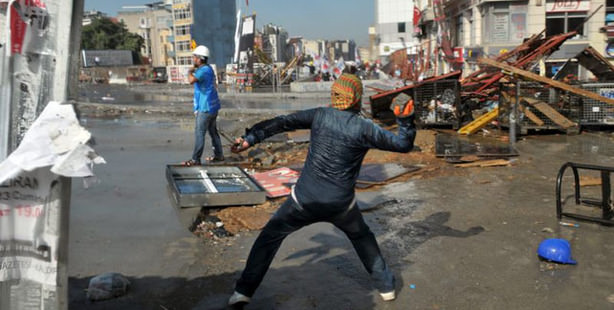 A Turkish court turned down the prosecutor’s indictment for Gezi Park protesters, citing lack of evidence and uncertain descriptions in the indictment.

Istanbul prosecutor Nazmi Okumuş filed an indictment last week against members of the Taksim Solidarity Platform, which organized the protests. The prosecutor accused platform members of running a criminal organization, resisting arrest and damaging properties. Judges, on their ruling on the indictment, said criminal organization charges lacked exact description of crimes allegedly committed by the defendants. The ruling also cited lack of names of police officers whose arrests were resisted by defendants.
Judges said the indictment also failed to mention which suspect damaged the AK Party vehicle noted in the indictment.

The indictment will be presented to the court again after the shortcomings mentioned by the judges are addressed.

Members of the Taksim Solidarity Platform will appear before the court if judges approve the indictment. The prosecutor's office asked the court to sentence defendants to prison terms of up to 29 years. The investigation against demonstrators started on July 8, 2013, about a month after the protests started. Among the plaintiffs are ruling AK Party's Istanbul branch and a man who claims his son was paid by protest organizers to attack the police.