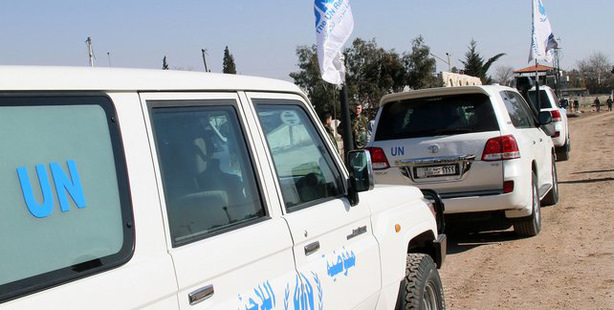 The Turkish Foreign Ministry condemned an armed attack by Syrian regime forces against a U.N. aid convoy which arrived in the besieged city of Homs over the weekend.

Reiterating the Syrian regime's obligations under international law, the written statement read: "It is unacceptable and inexplicable to remain indifferent to this attitude displayed by the regime, making a mockery of the international community and universal values, as well as its condemning the people of Syria to starvation, thirst and epidemics."

The ministry called on the U.N. Security Council to take strong, compelling and resolute steps that would alleviate suffering emanating from the humanitarian disaster in Syria without delay.

The statement echoed the government's sentiment that the regime has shown again how far it stands from a political transition process and a peaceful solution by perpetrating such an attack.

Although Syrian government officials and the U.N. agreed last week on a "humanitarian pause" to allow women, children and the elderly to leave the Homs, humanitarian aid trucks trying to supply nearly 2,500 people came under fire for a second consecutive day on Sunday.

It was reported that at least nine Red Crescent and U.N. vehicles were trapped and two trucks were damaged during the al-Assad regime's attack.