Istanbul's third airport to be constructed regardless of the court ruling 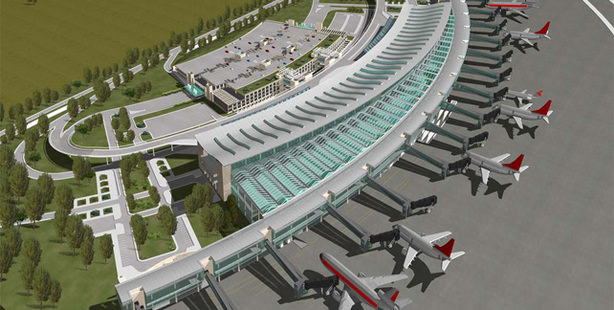 The ruling came after a group of locals filed a lawsuit claiming the airport will damage the environment. The General Directorate of State Airports Authority (DHMİ), which oversees the construction, said the project will not be suspended.

The lawsuit claimed the project started before the expiration of the period for discussion with locals. Examining the case, Istanbul's Fourth Administrative Court ordered the suspension of the environmental assessment report that approved the airport project. According to the ruling, the suspension may be lifted after further examination of project's impact on environment by independent experts.

In a statement yesterday, the DHMİ announced the ruling was not binding for the construction, which will not cease. Echoing the DHMİ statement, the Minister of Transport, Maritime Affairs and Communications Lütfi Elvan said the ruling was only an objection for environmental assessment report and will not affect the project.

Elvan said last month unnamed powers sought to obstruct the construction of the third airport, as well as a third bridge in Istanbul's Bosphorus and described the obstructionist efforts as a blow to Turkey's development.

İdris Güllüce, the Minister of Environment and Urban Planning, said the court's ruling "must be an error" and denied that the project started before the expiration period. "No objection was raised until the deadline for report's discussion," Güllüce said. "We certainly respect the law and the court but we believe there must be a clerical error." He said his ministry obeyed regulations regarding the environmental assessment report and said it would appeal. He emphasized the ruling will not cause delays in "such a perfect project." On a question regarding whether the ongoing work was illegal after the court issued the verdict, Güllüce said the ruling was only for temporary suspension. "This issue will be resolved soon anyway," he added.

The airport's construction is scheduled to start later this year and expected to be completed in a year. It will be built by a consortium of Turkish companies Limak, Kolin, Cengiz, MaPa and Kalyon, which won the tender for the project on May 3, 2013 by offering 22.1 billion euros for the project. It will be constructed in a northern district of Istanbul's European side. The airport, billed as one of the biggest airports in the world, would be able to serve 90 million people a year and this capacity would be gradually increased. It will have 16 runways and an apron with a capacity of 500 airplanes.