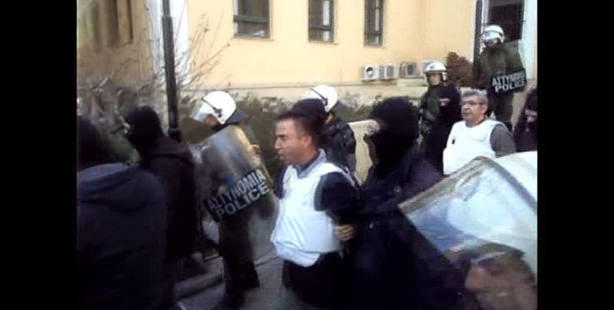 Akkol, the perpetrator of the 1996 murder, is caught by the police in Athens

İsmail Akkol, wanted for the murder of businessman Özdemir Sabancı in 1996, was arrested in the Greek capital of Athens.

Akkol, a member of the Revolutionary People's Liberation Party/Front (DHKP/C), a terrorist organization, was arrested along with three other DHKP/C members. Among the captured suspects are Hüseyin Fevzi Tekin, a senior leader of DHKP/C, Murat Korkut, wanted for a rocket attack on the offices of AK Party in March 2013, and an unidentified woman.

The suspect, along with two other DHKP/C members, is accused of assassinating Özdemir Sabancı, a member of Turkish business giant Sabancı family. Sabancı, his secretary Nilgün Hasefe and Haluk Görgün, general manager of Sabancı Corporation's Toyotasa company, were killed during a meeting at the company's headquarters in Istanbul. Fehriye Erdal, a DHKP/C member who was working at the company under the disguise of a cleaner was arrested for her involvement in the murders. She fled to Belgium and then disappeared. Mustafa Duyar, another suspect, was captured in Turkey and was killed in prison.

When captured, İsmail Akkol was hiding in a penthouse in Athens and carrying a fake ID. Hüseyin Fevzi Tekin is described as a high-ranking official of DHKP/C who rose to the top after the death of DHKP/C leader Dursun Karataş in 2008. He was arrested after bombings were carried out in Istanbul's Fatih district in 1999. After his release on parole, he disappeared. He is accused of commanding the organization from Greece.

DHKP/C, founded in 1978 as a Marxist-Leninist party, was designated as a terrorist organization by Turkey, the United States and the European Union. Under the name of (Revolutionary Left) Dev Sol it used until 1994, the organization claimed responsibility for a series of high-profile murders, including the assassination of a nationalist politician and a former prime minister. DHKP/C claimed responsibility for a suicide bombing at the U.S. embassy in Ankara, which killed a Turkish security guard in 2013.