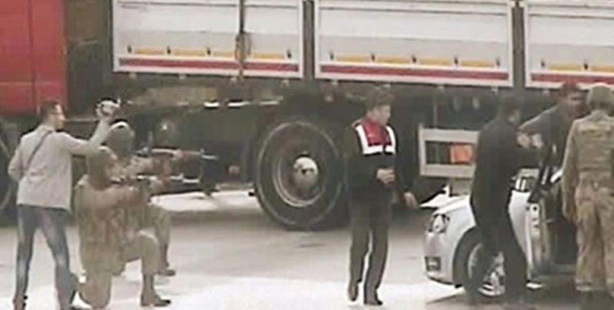 A probe into a prosecutor's order to raid trucks belonging to Turkey's National Intelligence Directorate (MİT) on Jan. 1 and Jan. 19 has concluded that the operation was a "counter-espionage activity" aimed at harming the work of the MİT.

The raids were carried out in the southern province of Hatay on Jan. 1 and in Adana on Jan. 19, and have since stirred controversy across Turkey. The government has accused a prosecutor affiliated with the powerful Gülen Movement of seeking to discredit it by ordering the operation. The incident, which is the latest in a series of unauthorized raids on Turkish intelligence's vehicles, comes after members of the Gülen Movement undertook a non-sanctioned anti-graft probe in December aimed at discrediting the government.

The head of the probe into the Jan. 1 and Jan. 19 raids, Ali Doğan, has ruled out an investigation of MİT officials who were detained in both incidents. He also questioned in the report how and why the trucks, despite an anonymous tip-off from the capital Ankara long before the raid, were not stopped before traveling all the way to Hatay and Adana and how details of the operation were leaked to the press. Doğan said that taking into consideration evidence collected thus far, the raid appears to have been ordered to discredit MİT and its activities."On the other hand, a possible counter-espionage operation by organizations in Turkey was not considered. By exposing personnel and activities of MİT, these organizations aimed to weaken MİT and leave it defenseless against foreign intelligence organizations. Through this investigation, the structure of these organizations [looking to damage MİT] may be uncovered," Doğan said in his report.

Detailing the Jan. 19 raid, Doğan said in his report that troops surrounded the trucks and pointed their guns at MİT officials. "They were handcuffed although they identified themselves as MİT personnel. Contents of the truck were photographed," he said. Doğan added that exposing MİT activities, whose secrecy is protected by law, amounted to a criminal act and that some may be trying to link MİT to al-Qaeda as part of a plan to force other countries to apply pressure on or even place sanctions on Turkey. Following the raid, several media outlets have claimed the trucks were carrying weapons to al-Qaeda affiliates in neighboring Syria.

The prosecutor said the trucks were carrying humanitarian aid to Turkmens in Syria's Aleppo province.

"Al-Qaeda or Islamic State of Iraq and the Levant (ISIL), a similar organization, have never engaged in clashes with the Assad forces so far. Çobanbey (Jawban Bak) where humanitarian aid access was cut off for 10 days after Jan. 19, the day the truck raid was carried out, was captured by ISIL. Turkmens in the town had to flee to Turkey. These developments show what the tip-off and the ensuing raid aimed to do," Doğan said.

At the time of the raids, aid deliveries were seriously delayed, reportedly causing Turkmens in nine villages attacked by ISIL to flee. Tarık Sulo Cevizci, a senior official of Syrian Democratic Turkmen Movement, a Syrian opposition movement, said medical and food aid to Turkmens arrived one week late and the delay led to deaths among starving Turkmens. Cevizci said Turkmens survived in the face of oppression in Syria since the conflict began thanks to aid from Turkey but truck raids dealt a blow to community's morale. "We could have won the war if trucks arrived in time," Cevizci said.