Turkey continues to serve as an asylum for Syrian refugees 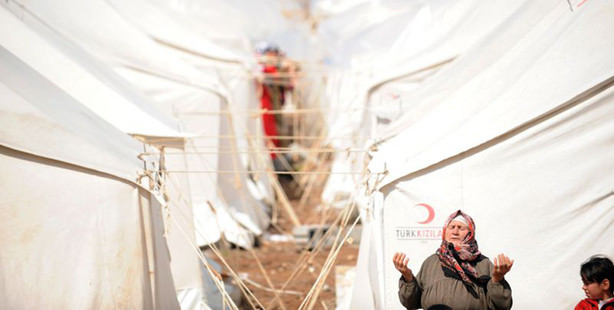 The ongoing conflict in Syria has ravaged the country and resulted in a large-scale humanitarian crisis. More than two million Syrians have fled the country with another 6.5 million in Syria no longer living in their own homes. In 2014, three-quarters of the population is expected to need humanitarian aid

Turkey, having a 900 kilometer long border with neighbor Syria, maintains its "open door" policy for Syrian refugees. However, the U.N.'s refugee agency United Nations High Commissioner for Refugees (UNHCR) warned on Tuesday that Turkey will face much higher numbers of refugees. According to UNHCR, more than 20,000 Syrian refugees have arrived to Turkey since the start of the year in the biggest influx since early 2013. Over recent days, more than 500 persons have been arriving daily across official crossing points, sometimes as many as 1,000-2,000 daily.

The U.N.'s refugee agency also stated that this new influx appears to be spurred in part by the upsurge in fighting reported across the border in northern Syria, particularly in and around Aleppo, including the conflict among opposition groups. In line with this statement, the Turkish Prime Ministry's Disaster and Emergency Management Presidency (AFAD) also confirmed that in the recent days more Syrians fled to Turkey as clashes escalate on the Turkish-Syria border. The head of AFAD, Fuat Oktay, stated that there has been an increase in the number of Syrian refugees who have fled to Turkey in the last few weeks. "The number of Syrians in our camps has currently reached 218,000. Entry through the provinces of Kilis and Gaziantep have increased, particularly in the past few days, due to barrel bomb attacks by the regime and clashes in the provinces close to the border," said Oktay.

He also noted that the majority of Syrians who fled their country in the last two weeks consist of Turkmens.

Recent data from AFAD indicate that the number of Syrian refugees in Turkey hosted at border camps and city centers has exceeded 714,000. Moreover, 70 percent of the refugees are women and children. There are currently 22 refugee camps in 10 Turkish provinces, mainly close to the border. The cost of building a camp is $10 million, whereas the monthly operational costs of a camp is $3 million.

Since the beginning of the Syrian civil war, Ankara spent $2.5 billion for the Syrian refugees. In spite of this, Turkey has received only $180 million in financial assistance from abroad, which is less than 10 percent of the amount already spent. Half of this came from the United Nations in the form of humanitarian assistance, with only $50 million from Saudi Arabia and $10 million from other countries.

Turkey's aid efforts to Syrian refugees are praised by U.N. officials and European politicians. "The refugee camps is a demonstration of how generous Turkey is in providing the best possible conditions for refugees not only to see their needs, but to restore their dignity," UNHCR High Commissioner Antonio Guterres said during his visit to a refugee camp in the southern province of Şanlıurfa on Jan. 17. President of the European Parliament, Martin Schulz also touched on Turkey's accommodation of 700,000 Syrian refugees and praised the treatment of Syrian refugees in the country during Turkish Prime Minister Recep Tayyip Erdoğan's recent visit to Brussels.