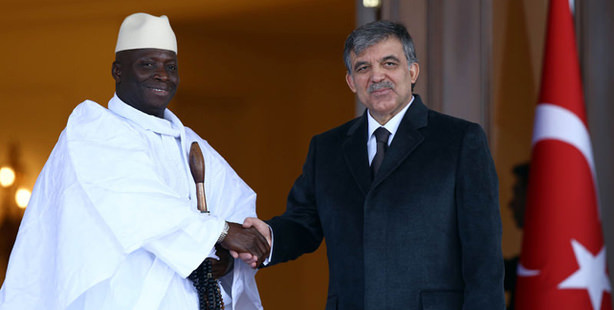 Gambia's President Yahya Jammeh paid an official visit to Ankara yesterday, nearly 17 years after he last travelled to Turkey. After meeting with Turkish President Abdullah Gül at Çankaya Palace, Jammeh hailed Turkey's importance both as an European country and in terms of Turkish-African bilateral relations.

Jammeh added that Gambia, located in the South Western part of Africa, lies in an economically fragile region of Africa and can benefit from Turkish investments, especially in its tourism sector, which has seen a boost in recent years.

Jammeh went on to say that Turkey's economic growth and development serves as an example and Gambia is looking to follow in its footsteps. "Turkey is Gambia's number one ally," he said, adding that it is his hope a free trade agreement can be reached between the two countries shortly after March.

Next on the list of foreign guests coming to Turkey is President Gül, who is expected to welcome Spain's President Mariano Rajoy, who arrived in Ankara today, together with three other Spanish ministers. Rajoy is also scheduled to meet with Prime Minister Recep Tayyip Erdoğan.