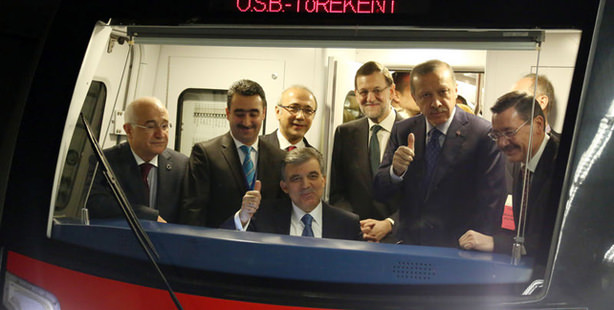 President Gül said that the new line will be free for a week and thanked to everyone who made effort on opening the line.

Lütfi Elvan, Minister of Transport, Maritime Affairs and Communications said the line will be expanded in the coming years and added that 1.2 million people will be benefiting from the line every day. He also said that two new lines will be in service in a few years.

"This is a historical day for Ankara and its people, said Erdoğan. "This metro line will play a significant role in solving the traffic problem of the city."

Rajoy, who attended the opening ceremony during his official visit to Turkey, voiced his support for Turkey's European Union bid.

"Building big projects in common requires a large dose of political ambition, determination and willingness to make sacrifices, and the reforms are never easy, as Spain's recent experiences can show," said Rajoy. "Spain supports and will continue to support Turkey's efforts along that line." The two countries stressed on improving the bilateral relations in terms of increasing trade budget and launching new joint projects.