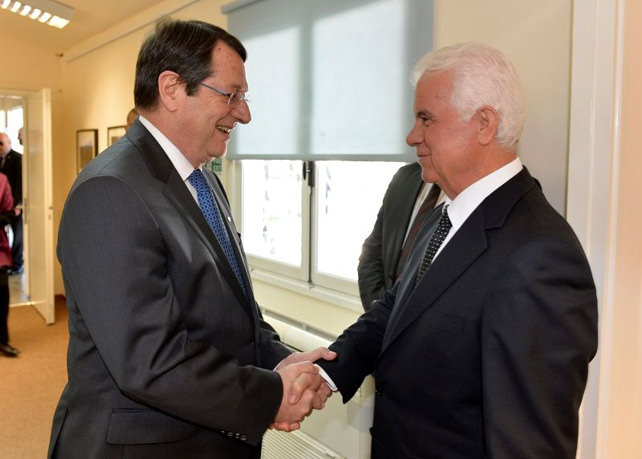 Anastasiades and Eroğlu sit at the negotiating table after a stall

Revived peace talks between Turkish and Greek Cypriots to reunite the island are receiving strong support from countries around the globe after an almost two-year stalemate.

The dispute in Cyprus has long been seen as one of the most important political issues in the Mediterranean region and Turkey's biggest challenge on its way to European Union accession.

Lisa Buttenheim, the resident U.N. envoy on the island, read a joint statement after the meeting saying that rival leaders expressed their determination to resume structured negotiations in a results-oriented manner.
The U.S. State Department spokesperson Jen Psaki declared yesterday during a daily press conference that it welcomed the peace talks as an important move to achieve a just and long-lasting Cyprus settlement.

She said the U.S. administration is urging both parties to seize this opportunity to make substantial progress toward a settlement reunifying the island as a bi-zonal and bi-communal federation.

Denmark was one of the two countries which sent peacekeepers when Turkey exercised its constitutional right and conducted a military operation against far-right Greek Cypriot extremist group's coup. Lidegaard further said the peace talks were resolutely supported by Denmark, which since the beginning of the UN mission there has allocated a total of 22,000 soldiers to the mission.