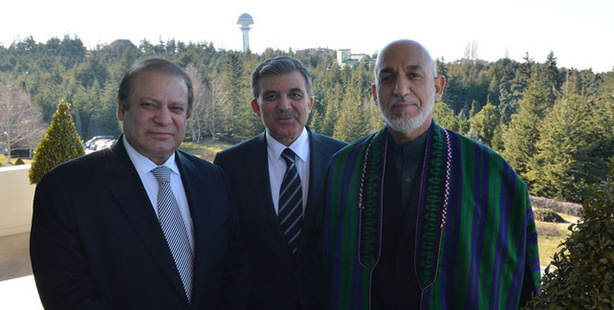 The Trilateral Summit ended with an agreement on the regional stability

In a joint statement issued after the 8th Turkey-Afghanistan-Pakistan Trilateral Summit meetings concluded on February 13, the three countries agreed that they will explicitly share any kind of intelligence data related with terror activities in the region, and further underlined the importance of maintaining efficient border control between Afghanistan and Pakistan.

The summit has been the most successful so far, said Turkish President Abdullah Gül after meeting with Afghan President Hamid Karzai and Pakistan Prime Minister Muhammad Nawaz Sharif.

With security and securing peace as the main focus, the three leaders discussed critical political and security transitions that will take place in Afghanistan, including the presidential elections and withdrawal of NATO forces by the end of the year. Afghani leaders called on Pakistan's government to increase its efforts in convincing the Taliban to join peace talks.

Gül noted that Turkey will increase its assistance and Pakistan Prime Minister Sharif highlighted the importance of "common endeavors at the regional and international levels," and added that Pakistan and Afghanistan are on the same page in terms of fighting terrorism.