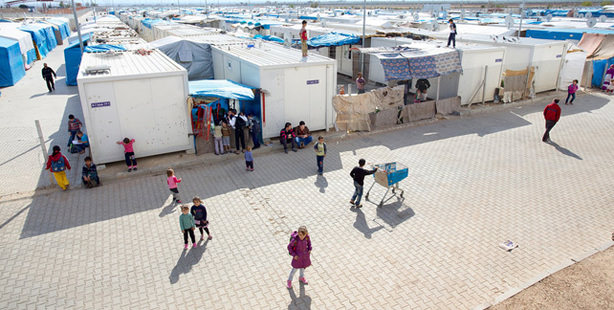 Turkey, which hosts 210,000 Syrian refugees in 22 refugee camps, is being lauded by the international community for the quality conditions it provides for the refugees fleeing the conflict in their native Syria.

The "New York Times," in an article published on Thursday, praised Turkey for hosting the refugees in clean, secure camps with access to sufficient food, medical care, and even education and extracurricular activities.

The article, "How To Build A Perfect Refugee Camp" details the conditions inside the refugee camps established by Turkey, focusing on a refugee camp in the southern province of Kilis.

According to journalist Mac McClelland, the Turkish facilities bear no resemblance to the "wretched" refugee camps in other parts of the world. "No tents. None of the odors – rotting garbage, raw sewage – usually associated with human crush and lack of infrastructure," she wrote.

The camps, many of which were built with containers instead of tents, were compared to "a nice suburban neighborhood with streetlights, playgrounds and fire hydrants." Mentioning schools in the camps, the article says 2,225 students attend classes at the refugee camp in Kilis.

The article notes the high standard of living in the camp, which is attributed to Turkish government's Disaster and Emergency Management Presidency (AFAD). It is also underlined how Turkey received little support from the international community while setting up the camps.

Refugees interviewed for the article described the camp as "perfect," with every three-bedroom prefabricated house having access to hot water, a refrigerator, a stove and a color TV.

Refugees interviewed for the article are effusive in their gratitude to the Turkish government for the assistance in a time of need. According to the article, food delivery to refugees "encapsulates how well Turks supply refugees." Instead of being fed unsavory rations, refugees can shop at grocery stores in the Kilis camp with a government-issued debit card with a balance of TL 80 per person every month.

Turkey, which has a 915 kilometer border with Syria in the south, has an "open door" policy for Syrian refugees.

As the number of Syrians that fled from the conflict into Turkey exceeded 714,000 and many seeking refuge outside the refugee camps, there are concerns regarding how to cope with the influx.

In the years since the conflict in Syria erupted, Turkey spent $2.5 billion on the refugees.

The office of United Nations High Commissioner for Refugees (UNHCR) recently released a statement that discussions were underway with Turkish authorities for additional emergency support to help Turkey manage the increasing number of refugees.

Turkey is estimated to host around 25 percent of the 2.5 million Syrians displaced due to the conflict.